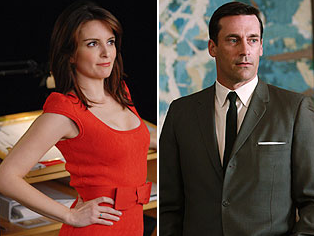 Jon Hamm to Guest Star on "30 Rock"
If Christmas and birthdays, and peanut butter and chocolate could all collide in one rainbow of amazing, it might resemble this. Jon Hamm, star of "Mad Men", future SNL multiple guest host, and actual fan of "30 Rock", will be guest starring in the Tina Fey extravaganza as a possible love interest for Liz Lemon. Something is wrong. This is too perfect. I think I need to lay down. 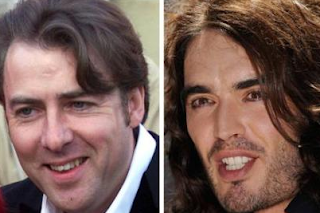 (Photo Courtesy of www.Variety.com)
BBC Head Rolls after Russell Brand Fiasco
Many on this side of the ocean may not know of Jonathan Ross and Russell Brand. Ross is a longtime talk show host in the U.K., whose style and experience comes close to O'Brien or Letterman. Russell Brand, who starred in "Forgetting Sarah Marshall", is a sex addicted, former drug using sexy god who hosted a BBC2 Radio show that followed the outrageousness of a Howard Stern. Well, looks like Ross (who should know better) and Brand (who's just crazy) got in trouble earlier this week for an October 18th radio broadcast that went a little too far, resulting in public complains, Ross' suspension from the Beeb, and Brand's resignation - along with the programming head.

The Daily Show Ratings Surge
Thanks to the heat of the current election, Jon Stewart and his crew got a nice ratings boost on Wednesday night due to Barack OBama's appearance. 3.6 million viewers tuned in, out doing the show's ratings high of 600,000.