Political Satire in a National of Few Laughs 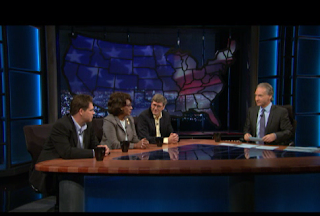 Bill Maher has been one of my favorite television comedic pundits since his days at Comedy Central. When his show "Politically Incorrect" made its way into the mainstream on ABC TV, he found himself fighting off the foes of liberal minded chatter. Unfortunately, Maher's time with ABC was cut short after September 11th, when he said something about Americans being terrorists, and well, the network didn't take kindly to that remark, so off he went. Thankfully HBO gave Maher another chance with "Real Time" and a platform to speak freely, passion and all.

It's not my intent to write too much about political humor despite the fact my favorite shows are "The Daily Show", "The Colbert Report", and to some extent "Saturday Night Live". The realities of this week's stock market plunge while the nation plows through a heated presidential campaign, rendering hatred from one party to another, has made me cling to the comedy of Jon Stewart and Bill Maher. It's no wonder their ratings have soared in recent months. It's not just because people want their news with a smile. It's due to laughter being the only way to ease the fear and anger that has been stirred by accusations, lies and ignorance. Stewart points out the insanity by showing its absurity through jokes and irony. Colbert pokes fun at the right wing by becoming a characterization of them. Bill Maher creates monologues and bits such as "Exit Strategy" and "New Rules" not just to speak of liberal views, but to peel away layers of bullshit and throw the truth in the face of those who won't listen. 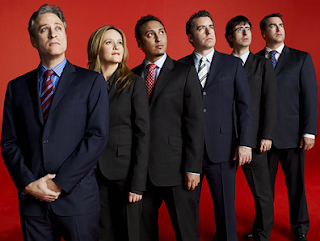 As Stewart, Colbert and Maher continue to make America think intelligently about the ways of politics and the downcast news of the economy, there is always the sense that despite the turbulence, we will prevail. Thank God we have comedy. If it weren't for the laughs, I think I'd ride that hobo train to hell.

SNL Highlights from the past few politically charged weeks: