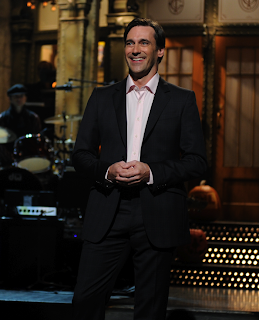 Jon Hamm has established himself as a continuing future guest host of Saturday Night Live, along the lines of Alec Baldwin, Ben Affleck and Carmen Diaz. He was on fire last night in a bevvy of political sketches as well as incredibly fun "Mad Men" spoofs that thrilled this MM fan to the marrow. Cameos by John Slattery and Elisabeth Moss playing their perspective MM characters was a surprise and fun to behold.

Hamm has always had the funny chops to carry off a guest starring stint on SNL. You can see the glimmer of humor in his eyes on Mad Men, and the guy hangs around Jimmy Kimmel for God sakes. For a program that tends to be serious with variable degrees of lighthearted moments, it was a blast to find Hamm portraying Don Draper in a comedic light. Highlight of the night:
"Don Draper's Guide to Picking Up Women".

So much more was in store. A funny Halloween bit involving Will Forte as a neighborhood sex predictor, a hilarious spoof of a Vincent Price fright hour, where Hamm showed his impressionist skills by nailing a perfect James Mason. A great reunion with Maya Rudolph flourished into the Michelle and Barack OBama variety hour, whereby Hamm showed his JFK imitation skills to perfection. Here's hoping that Hamm returns for more appearances. He ruled the show.

Amy Poehler was missing due to the very wonderful fact that she and her husband, comedian Will Arnett had their first child the day before - Archie Arnett. Amy will apparently be leaving SNL, but will be working on the new Greg Daniels (showrunner of "The Office") project for NBC. Go baby mama!

(Photo courtesy of NBC Universal Media)
Posted by TVBlogster at 9:03 AM