It's a "Mad" Week: Mad Men Showrunner's Future in Doubt 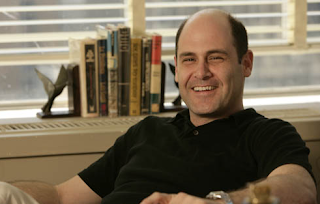 This has been a busy week in the "Mad Man" camp. First Jon Hamm hosts "Saturday Night Live", then the season finale of the Emmy award winning show airs on Sunday, earning stellar ratings. Now this.

It's been reported that negotiations on bringing back "Mad Men" for a third season have been slow. Anxiety grew high as the second season drew close to an end, only to find that AMC had not officially picked up the show for season three - until a few days ago, when the "all clear" had been rung, and fans rejoiced that, yes children, there will be another year of Don Draper. Yet, all hopes have come to a screeching halt. Nikki Finke has reported that Matthew Weiner and Lionsgate have hit a brick wall when it comes to his contract. CAA and Weiner want $10 million a year, plus control over promotion and advertising, which, as Finke mentions, is fine for a premium channel such as HBO, but it's pretty rich for basic cable AMC.

This may all be smoke and mirrors to allow Weiner and Lionsgate to compromise on a decent deal, but it's scary for "Mad Men" viewers who appreciate the intense devotion and imagination of Weiner, whose own vision brought this story to the small screen. When a list of possible new showrunners is being considered to replace him, one of them being Aaron Sorkin (other than "Sports Night" - not a fan, me), the heart thumps through the chest in fear.

Lets hope that this is one of those tactics they use in Baseball, where the free agent holds out, looking at other teams as options, until the favored team wins. Although the show has been signed on for two more years with or without the original showrunner, it's clear: "Mad Man" cannot go on without Matthew Weiner. Here's hoping they reach a fair deal soon.

Update: According to Defamer, reports of Lionsgate looking to replace Weiner was only a rumor. There appears to be slight friction because they are still hashing out details, with back and forth still going on.
Posted by TVBlogster at 9:03 AM