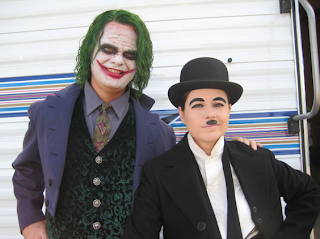 This wasn't the Halloween episode expected, but the cold open was a satisfying call back to the great days of "The Office". Pam looked cute (although a bit creepy) in her Charlie Chaplin/Hilter get up, despite the fact that corporate New Yorkers don't dress up for the day. (We don't. I'm looking around now. Not one mask nor kitten ears in sight- not to say the streets aren't filled with holiday revelers). Creed won the Best Joker Costume award for the night, beating out Kevin and Dwight, simply by inhabiting the role rather than just playing dress up. Jim as "Dave" was amusing, but "Three Hole Punch Jim" from season two may have been his pinnacle as far as Halloween drag goes.

As Michael and Holly's love affair crumbles around them hour by hour in the front seat of Darryl's truck, it's clear that this episode was going to be a downer. Cut to Dwight pranking Andy by threatening to apply to Cornell, and "Employee Transfer" was quickly becoming a Frankenstein of used bits and parts from other episodes of the past. Mix in the Halpert brothers and their douche-baggery, and you have an odd, off kilter episode, making one feel that "The Office" of old has been left in the dust. Dwight sending up Andy with his Cornell sweatshirt and threat to apply to his Alma Mater? Seen it in "Product Recall" when Jim imitated Dwight and Dwight imitated Jim. Michael's sad road trip back with Darryl? Done. It was used in "The Negotiation" when they road hauled it to New York to ask for a raise.

But it's not the rehash that annoyed as much as storylines with a "B" quality feel being jacked up as primary plots. First of all, the running joke on Cornell and Andy wore thin last year. 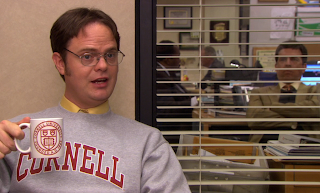 Dwight and Andy acting like a duo of school aged children in a middle school cafeteria trying to one up the other was funny, but overkill. As the time ticked away from the meager twenty one minutes the network allows in between commercial breaks, the same Andy/Dwight give and take stretched out and bumped the probable Jim and Pam scenes most fans (such as myself) hoped to see . Also, the revenge Dwight plots against Andy, all for the sake of losing Angela was wearisome. There have been more Angela/Dwight than Jim/Pam so far. Sorry, but Dwangela does not replace Jam. If people find them too schmoopy and tired of their story - too bad. They are an important part of this show, and they are being under used, especially with Pam away.

As a fan of Holly, I was surprised to find myself really tired of her relationship with Michael. It dominated the last four episodes. Yes, the story arc had to unfold in a reasonably short time since Amy Ryan is only signed on for six episodes this season, but it was becoming too much of the Holly/Michael show. Perhaps it was used as filler for the lack of Jim and Pam. And yes, it was a lovely coupling, making a love worn Michael find a true mate. Yet, cue in the thunder. David Wallace played the evil mastermind behind breaking up the two by transferring Holly to Nashua. Apparently, our HR lady is originally from that branch, which confused many focused "Office" fans since in last year's season finale, she mentioned having been at another company...not another branch. Continuity, Writers. Continuity.

Michael's heartbreak over Holly's decision to break up was vintage Steve Carell. When he pleaded to Holly to not break up with him screaming, "I'm too weak! I'll end up back with Jan!" I was right there with him. Those tears? You couldn't help but weep for him. Oh Holly. Don't do that to Michael. Don't do that to us!

The meat of "The Office" for me has always been Jim and Pam, and once again, their relationship, something we have suffered through three seasons of strife, was pushed back as a "C" story. We finally met Jim's brothers! Yay, they are probably cool like him, or they suck. At least we'll get a feel for the Halpert clan. Well, almost. 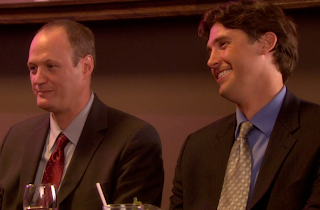 The Brother's Halpert was a wasted opportunity of jerky, frat boy sadness sparked by Pam's hankering for a prank. Equipped with a lame story about her engagement ring being left in a smock, and the brothers playing along, this fan was immediately disappointed in our prankster Pam. A misplaced engagement ring? Come on, girl, you're losing it. Pam's set ups are much more artful. However, the guys have a better idea. Let's do that prank on Jim when he was with his girlfriend in High School! Yah! Hilarious! What ensued was uncomfortable moments of Jim being confused while Pam was the one being targeted. She handled it like a trooper, and was welcomed to the family by the brothers, in the form of a text message received while the future Mr. and Mrs. Halpert walk away from this date. If fans were getting the dry heaves over the saccharine sweet cuteness of Jim and Pam's missed voicemails a few weeks ago (which I loved), then this was my eye roll moment. The text message was a bit hokey to me.

But they do look happy and lovely together: 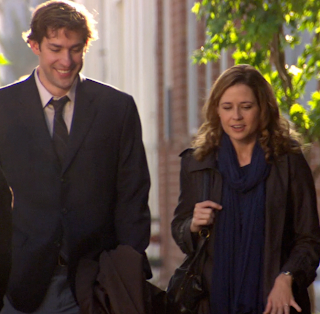 And at least they mentioned my beloved Mets during dinner.

There were some wasted opportunities in this episode. This has been a persistent trait in season five thus far.

Even the two minute replay of "Employee Transfer" is lame, since there are no Jim and Pam chowing with the Halpert dunderheads. Sadness. Again.