As the World Crumbles Around Us..."The Office" is Still Here. 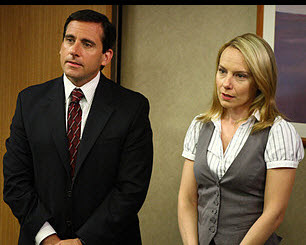 Last night's episode of "The Office", entitled "Business Ethics", wasn't one of the strongest; yet, even when the laughs are quiet and the story is tame, this cast and crew still provides the best television on air.

In terms of surprise twists and more Jim/Pam love making, there were low expectations going into last night's show. NBC had already leaked the cold open on their site, and provided screeners to their favorite bloggers (not me), giving the usual close-to-the-vest lock down on story lines a rest, perhaps indicating that "Business Ethics" was going to be a tame, non-explosive episode. Indeed, it was. However timely the topic of "ethics" is in this week's news of the day, "The Office" indirectly, and unintentionally, hit pay dirt with good timing by showing their small corporation's profound dysfunctional business environment. Since the real world economy is in tatters at the moment, and financial institutions are questioned for their ethical practices, the contrast was stark.

But let's put all that bad news out of our heads. This is fictional Scranton PA, and the offices of Dunder Mifflin are being presented with grown up issues as a result of Ryan Howard and his fine business acumen of last season. You remember douchebag Ryan of last season? He was in his mid-twenties, and never processed 9/11? He spent his days in New York, dating vacuous babes and snorting copious amounts of cocaine while cooking the corporate books? Yeah, that guy. (No McCain pun intended). The one who was lead away in handcuffs. Why is he back at Dunder Mifflin spewing false mea culpas while jotting names on his shit list instead of being in jail is beyond this blogger.

Nevermind. This was a Holly and Michael episode. They are a dorkier version of Jim and Pam. Partners in arms, they present the bored and bemused conference room bunch with a song and dance Olivia Newton-John intro of "Let's Get Ethical" to rouse up the troops and give Holly a boost as the new HR lady ready to take charge.

As talk goes back and forth about Post-It pilfering and pen stealing from the supply closet, Meredith reveals that she's been bartering with an office supply reps at Hammermill by offering sex in exchange for discounts and steak coupons. Has Meredith finally gone overboard? Yes and no. It appears that her actions are grounds for termination in the sane corporate world. In the Dunder Mifflin universal for the dysfunctional, Meredith is helping the company with that discount. Meanwhile, Holly gets reamed by the awful HR Corporate evildoer Kendall for not finishing a training session that Michael, in his silly childish manner, cut short due to dumbness. It seems that when Holly tries to follow the rules and question Meredith's ethical actions, Michael starts to see her as a female Toby Flenderson who sees his office, not as a family, but as an office. The nashing of teeth and little boy hatred begins. It doesn't last long. The wrath of Kendall hits a nerve with Michael, who wants to figure out a way to tell her "I told you so with a rose" or to let it go.

With the exception of the cold opening, where we hear her voice on a phone call to Jim, Pam was missing in action in this episode. There was a certain emptiness with out Miss Beesly. She's been in every single episode since the show's inception on US soil, so this writer was taken aback by the black hole of weirdness without Pam to balance the ying and yang of the office. At least she encouraged Jim to forgo his qualms about telling the crew of their engagement, leading to comedic results. 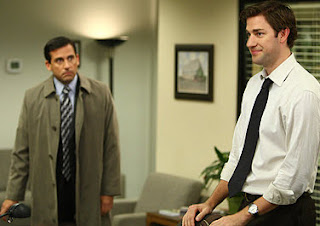 "The Tall One" spills the beans and is met with all the snark and indifference he had expected. Yeah, who cares about those two? They're so cute. So perfect. Don't they know that Angela and Andy are the engaged couple that matters? In hell? With Dwight on standby for Angela's booty call? Only Michael and we the audience are thrilled. His tackle bears the force of a million happy viewers, as Jim falls like a skinny tree knocked over by a bulldozer. "Sorry..." says Pam from New York. Yeah. Sorry, Pam - that the lameness of the Dunder Mifflin crew can't share the happiness we do. 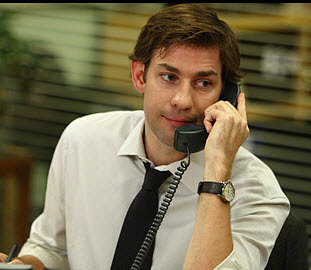 Jim and Dwight were back to their give and take of hate and annoyance. During Holly's training session, she mentioned how company time was wasted by employees doing other things other than work - like hanging around a water cooler for a half hour. Dwight, in his super hero self diluted way, spoke of his time management purity. Yeah, Dwight. I suppose playing "Second Life" at your desk and screwing your ex-girlfriend in a warehouse back room provides good salesman skills. (Oh please Jim...Please find out about this!) Jim calls him out by spending the rest of the day not getting any work done by timing every sneeze, pee break and wink Dwight makes. Best moment was Jim's discussion with Oscar of the previous night's "Battlestar Gallactica". Watching Schrute cringe as a parade mash of up his favorite geeky characters of all time - Potter-Rings-Star Wars style - mock him was priceless. Oh, Jim. I love it when you're a dick. This must say so much about me more than it does about you.


Kath and Kim:
The highly promoted "Kath and Kim" premiered last night. The critic panned this show. Being a fan of Molly Shannon, I rooted for this one. But upon first viewing, sadly, it is quite the stinker it was projected to be. No laughs. No cohesive character development. There is no reason for me to care about these characters. They are annoying.
Posted by TVBlogster at 6:24 AM

Email ThisBlogThis!Share to TwitterShare to FacebookShare to Pinterest
Labels: Kath and Kim, The Office