In the past, we've seen Dwight emerging from a warehouse after monkey sex with office mattress Angela. We've seen him handle is own urine in three different episode for three different reasons. Somehow Dwight's antics tend to end with him zipping up his pants. Here's the latest promo for next Thursday's episode: "Baby Shower" where Dwight dabbles in enacting another bodily function uncommon to the male gender. Meanwhile the office awaits the next lame in-house celebration, this time involving Jan and the long awaited birth of her spawn. Spoiler alert. Avert your eyes if you must.

This is my favorite part. This was my reaction too. Driving into a lake sounds good about now. Hopefully, the show is better than the promo. Frightening. 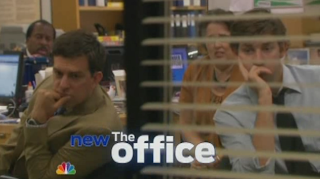