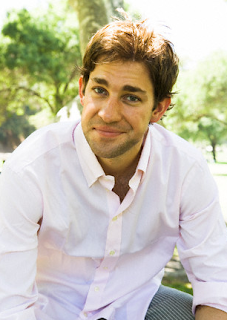 It's come down to this. No one is reading this blog. I know. It's just me writing stuff pretending I have readership. I can live in my own world of delusion.

I like this guy. I happen to know it's his birthday today. Although no one will see this, especially the subject himself, I wanted to throw out a universal shout to John Krasinski, six foot three, lanky-man, floppy hair actor who plays Jim Halpert on "The Office". He's also portrayed the heartbreaking yet funny Gideon in "A New Wave", major nerd Brethen in "Smiley Face", and the very sweet, deceitful yet tormented Carter Rutherford in "Leatherheads". (He was also in a movie with Robin Williams that I pretend never happened). "This Must Be The Place", the summer project he starred in with Maya Rudolph, helmed by Dave Eggers and Sam Mendes, promises to be amazing.

Krasinski's film adaptation of David Foster Wallace's book "Brief Interviews with Hideous Men", written and directed by John himself, has me waiting with baited breath for it's mythical, mystical release.

In my opinion, Krasinski has portrayed the most compelling character on television. Jim Halpert is the everyman to which John breathes the right dose of heartbreak and humor. This talent lends itself to other roles. John turns 29 years old today, but he's an actor spiritually older than his years.

Ok, enough. He's cool. He's funny. He also has great taste in music, and I'm a sucker for a guy with a good CD collection and a love for Indie bands.

Happy Birthday.
Posted by TVBlogster at 10:56 AM

Hey there, TV Blogster! Just thought you ought to know that someone out there does indeed read your blog (at least, The Office related posts). I always enjoy, and usually agree with, your posts over at TWoP, so when you mentioned you had a blog I made sure to bookmark it. Keep it up! Oh, and a big Happy Birthday (a couple days late) to JKras!

Thanks, Jamnicity! So great to see you here!