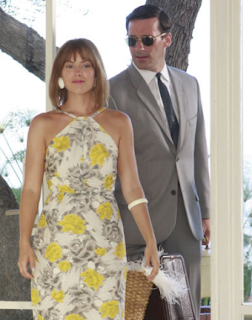 What a strange trip it's been. Don Draper hits L.A. and succumbs to letting is inhibition run wild. Not that it never had before in New York. But this is different. It seems that when the airline lost Don's luggage, and the heat sizzled his brain, making him hit the floor, he transformed back into Dick Whitman.

So many themes wove in and out of last night's storyline. Roger left Mona for a twenty year old bubble head, riding the wave of mid-life crises into the sunset. (Let's hope the wife everything he owns, including his socks and the suspenders that hold them up). Don's true self is unleashed by young Joy, a transient twenty one year old oddity, part of a roving clan of society lay abouts. Strange days. Don's L.A. journey was like a Hitchockian dream filled with imagined Betty sitings, heat exhaustion, and will power weakened by the need to liberate himself from the straight jacket of his created image.

Sal looked lost and confused as the Russian ad man hottie admitted he was gay. Everyone was flabbergasted and grossed out. Peggy lost her ponytail, and got a make over "Queer Eye for the Straight Girl" style. Betty was not home. But that luggage she kept dreaming about sits waiting at her front door.

As Don lived his hazy days in L.A., ready to take flight into another wild blue yonder, much like the space program of the time, Duck rounded up his British Ad Agent pals to buy up Sterling Cooper so he can take over and be president. Oh, that's going to be good. I have a longing to see Sterling Cooper get an ass whooping.

And Don. Last we saw him, he was shirtless with arm perched on the sofa. It's the compose image of the Mad Man logo of our suited, smoking anti-hero. Now he sits half naked, void of uniform, left arm stretched out instead of right. His cigarette in the other hand. Rebirth. Once he got that L.A. bug in his head, it felt like he'd never come back - or at least not come back the same.
Posted by TVBlogster at 1:12 PM