"The Office" Thursday! Tricks or Treat? 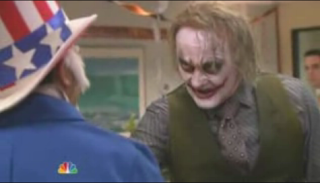 Just waiting on 9pm for tonight’s “Office”. The episode is entitled “Employee Transfer”. Tick Tock. Is it time yet?

“The Office” is the show I fell in love with back in 2003, when Ricky Gervais and Stephen Merchant created the cringe worthy, dark and funny, human and heartwarming original British series that transferred so successfully to the USA. The American version has taken on a life all its own. During the past five seasons, it has blown me away with jaw dropping heart ache, surprise turns and smart, gut wrenching laughs. This is the show that tugs at my heartstrings. I know these characters, and care about them as if they were real, allowing me to revel in their successes, join them in eye rolls in the conference room, and follow every move as they make their way through life, even if sometimes the results are a bit outlandish.

Sadly, I've been a bit underwhelmed by “The Office” as of late. The show seems off kilter to me. Yes, there are some funny, lovely moments here and there, but the goodness doesn’t hit me between the eyes upon original viewing. It takes two or three viewings to like what I see. The lack of Pam Beesly in the offices of Dunder Mifflin Scranton has taken a toll. It appeared as if she would be gone for only three months over the summer, which we partially saw in a span of eight weeks covered in the season premiere; however, three months has turned into five, as Halloween closes in, only to find Pam still in New York living the life of a college student without explanation. Meanwhile, Jim remains in Scranton, looking for ways to connect with her, not doing much growing, but staying strong in his trust of Pam. Perhaps this absence is to prove how integral each and every cast member is to the ensemble. It’s like a missing plank of wood in a DIY desk set from Office Max. Exclude one piece, and your table will be all wonky and rickety. It’s understood that Pam will be in tonight’s episode, but if she’s not back at her Receptionist desk soon, things will continue to be weird. And will she ever return to answering phones? Can you bring the girl back to Scranton after she’s seen NYC? I miss Pam more than I missed Jim when he was in Stamford. At least we saw more of him in Connecticut. Throw in Dwight having a baby watermelon, Jan being part of the Dunder Mifflin universe, Andy and Angela, Dwight and Angela, the likelihood of various twists and turns with plot and sloppy continuity (three months at Pratt is now five, birthday mix ups, which came first- Jim or Pam?), and it starts to feel like a regular sitcom rather than a fresh, goofy, human sitcom that wasn’t your average sitcom.

But, I do have hope. My heart is pounding at the idea of tonight’s show. We revisit Dunder Mifflin at Halloween once again. Creed will don his Dark Knight freakishness, and Andy will presumably be dressed as a member from the cast of “Cats”. Will Jim out do “three hole punch Jim”? (Spoiler alert) Speaking of Big Tuna, we finally get to peak into the Halpert family tree. His brothers make an appearance. It seems that pranks run in the family, and Pam uses it for good… or evil? Meanwhile, Michael and new HR lady Holly Flax are getting on like gangbusters, only to have David Wallace imply his unhappiness with their union in last week’s episode. The results of this discovery will play out in tonight’s episode.

Meanwhile, let's bide our time and hearken back to simpler days of "Office". Here's a photo from season two’s “Halloween”, when the pain was sweet and Beesly still had frizzy hair. 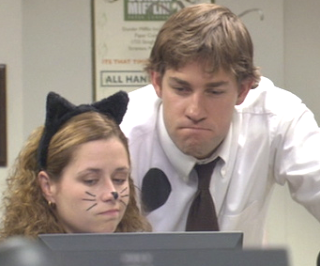 I am so, so excited for tonight's Halloween episode. To get me extra in the mood I watched season 2's Halloween episode, and was reminded just how much I miss Pam in the office. At least it seems like we might see Jim and Pam together tonight, but they need to bring her back to Scranton already. The chemistry in the office just isn't right without her, just like it wasn't when Jim was in Stamford. Still, I've been enjoying the season so far (except for "Baby Shower") and have great hopes for tonight. Hope you enjoy it, too!