Sunday nights are sometimes the saddest nights of all. You unwind as the last hours of the weekend draw to a close. Before you know it, you're off to bed only to wake up Monday morning and the work week has begun. Luckily, Sundays have been rocking when it comes to television. 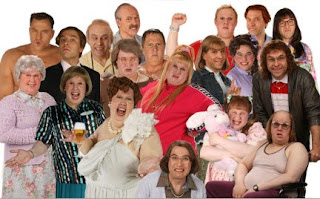 "Britain, Britain, Britain", croons iconic original "Dr. Who", Tom Davis, narrator of BBC America's "Little Britain" who continues his stoic vocal duties on these shores on HBO's "Little Britain USA". Davis is the omnipresent voice of comedians David Walliams' and Matt Lucas' world. His voice swells with pride at the mere mention of his great nation, almost to the point of sexual satisfaction, exploding in rapture and pride. Nevermind the implications. Puns and nastiness, bitchiness and pushing the envelope of gender, social class and sexuality has always been "Little Britain's" specialty; however, it seems they've lost their bite on that British Airways transatlantic flight.

The original "Little Britain" has been dancing over the American airwaves on BBC America 'lo these past few years, producing an array of oddball characters who lovingly mock various elements of British humanity with a dash of vinegar and salt. HBO has brought on the comedy of team of Walliams and Lucas to the United States, creating a local version of the BBC series where all the familiar characters intermingle with newly created American ones, to dish up a plate of weird that in some instances exceeds the original, yet fails in general.

They are all here: Vicky Pollard ("Yah but no but"), Bubbles DeVere ("Dahling, call me Bubbles."), Carol Beer ("Computer says no."), diet guru Marjorie Dawes ("Ohh...I luv a bit of cake!"), Dafydd Thomas ("I'm the only gay in the village") all and more have made the crossing, with the addition of a few new American ones to add into the mix. If you've followed the original, the U.S. version will have waves of familiarity; however, there is something missing from the new local incarnation: laughs. The characters maintain the same level of amusement and curiosity with an American twist. For instance, Sebastian, who in the British version is a government assistant smoldering with the lusty hots for the Prime Minister, is now the Prime Minister of England wanting the jump the bones of the President (portrayed by an African American actor, thus hinting at a possible Obama administration). For those who are fans of the original, this jump in character description is a bit jarring, and sadly, not as hilarious.

It seems the boys are trying too hard to be funny, as if the freedom of HBO gives them leeway to be more outrageous here than within the loose confines of BBC standards. A cameo by Rosie O'Donnell during one of their "Fight Fighters" sketches brought some laughs, but the last line of the sketch graphically describing something sexual (please don't make me say it) was a bit overdone and seemed created more for the shock than comedy. Of course the boys always like a little jolt to the jokes. Yet it doesn't hit the right pitch when it's gratuitous.

Walliams and Lucas rely much on the wigs, false teeth and fat suits, all adding to the curiosity of the characters. When Bubbles DeVere prances about in her evening gown, it's only a matter of time before she will disrobe and her dangling boobs are everywhere; yet, for some reason, her outrageous nakedness, so funny in the British series, seems goes to waste in sketches that don't hit the mark here. This is also apparent in the body builder buddies, whose names haven't been defined. Their outright Homophobia is parlayed into homo-erotic motions (complete in fat muscles suits) that try for laughs, but just seem forced.

"Little Britain USA" airs on Sundays on HBO at 10:00pm. But if you want some juicy laughs, watch the original on BBC America or download it from iTunes. The comedy is akin to Python and The Goons, with satisfying satire that exceeds their American incarnation.