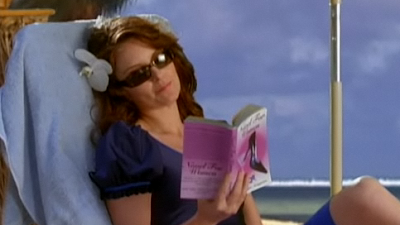 Our overworked Liz Lemon is in need of a "Calgon, take me away" vacation on the Island of St. Bartlesy, where black socks and sandals are accepted, walking turtles table your BLT's and cute guys serve you booze on a platter. But will Liz go? The flu has been going around the TGS studios, and flu shots are being given out like tickets for a Madonna concert: selectively - to only the "privileged", leaving the grips, set movers, sound techs to wallow in their infections and suffer. Only Liz, whose dream of languishing in the warm waters of no-feet land has been temporarily dashed due to over booking, stays on to help support the sniffling crew by not getting a flu shot in solidarity. That is - until her vacation is suddenly back on.

As infection grows around, claiming the souls of Kenneth and crew alike, culminating in a non-musical version of "Thriller"... 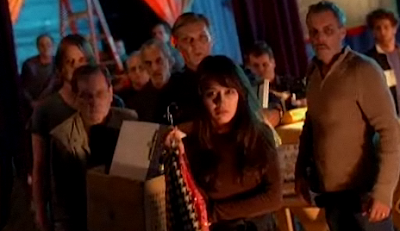 and turning a healthy Pete Hornberger into a flu zombie... 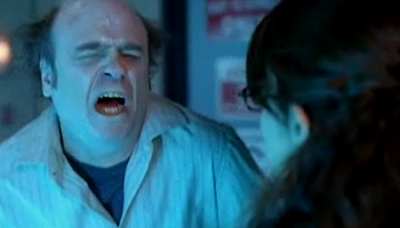 ..Liz ditches the germ filled gang she fought for, and goes for the flu shot... 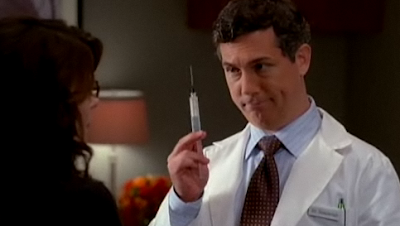 ..because this "moi" needs a vacation. Dr. Spacemen...should she pull her pants down? No, she had to dance for him, reminding this blogger of the "Brick Dance" from Weeds.

Meanwhile, with no time for dating, Jack convinces his overworked girlfriend Nurse Elise, to go out on the town and enjoy the spoils of New York with him. Being the devoted elder care assistant, she brings her senile patient with them to Broadway shows and walks through Central Park.

Poor Kenneth is struck down by what he calls "Ox Fever". White, Pale and scary weak, with a sick Page crew and lack of support, the super eager Page Parcell is sick to fetch soup for the crew - an idea created by Jenna and Tracy in a moment of selfish kindness. They go out, only to come back forgetting the soup, but adding new tales of their fashion spree on fifth avenue. Their attempt to give the gang the healing power of laughter, falls flat...like a clown pratfall.

Other than the recurring guest star role that Selma Hayek has been enlivening in the very cute and sexy Elise, the new routine of stunt casting didn't rule the episode this week. It was a nice side step away from characters fully driven by those with star power. Funny as usual, Flu Shot falls in line with 30 Rock's classic way of creating funny themes and zany Liz Lemon's need to be loved.