What to Watch...On The Internet 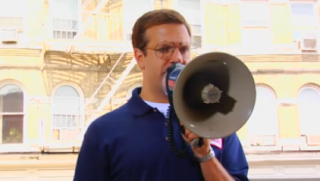 Jason Sudeikis in Crackle.com's "The Line"
Yes, there is good comedy on the internet. Fresh baked, ready for the clicking kind of sketch comedy/talks shows, slickly produced and cast with the funny and the famous who've by passed the fundamental television path and did a Sarah Palin by going rogue. Thanks to the advent of Funnyordie, Crackle and MyDamnChannel, familiar comedy talent is cranking out ideas and baking up new comedy for the taking. Whether you're taking a break from work, or need a diversion from network television, which is eroding due to distractions that include viewers turning more to the internet for entertainment, you will always find something hilarious to hang your hat on. 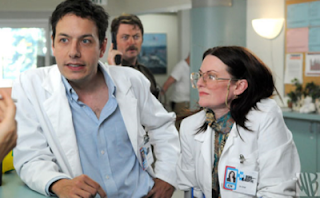 TheWB.com's "Children's Hospital" on thewb.com
"Children's Hospital" TheWB.com, already reviewed in a previous entry (just below) here at TVblogster, is a hilarious hospital parody written, directed and co-produced by Rob Corddry, with the help of David Wain and Jonathan Stein. A parade of familiar faces from comedy abound: Megan Mullally, SNL's Jason Sudeikis, The Office's Ed Helms, Desperate Housewives' Eva Longoria-Parker partake in the satire. It's raunchy fun, and worth viewing all ten episodes, now available at thewb.com. 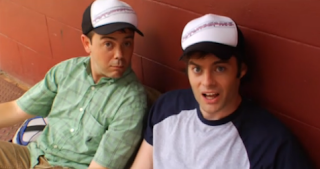 Joe Lo Truglio and Bill Hader in "The Line" on Crackle.com

"The Line", Produced by Broadway Video and directed by Seth Meyers, was originally filmed and released on Crackle.com last summer. Bill Hader (another SNL-er) and The State's Joe Lo Tuglio play die hard SciFi geeks who camp out two weeks before a long awaited movie release, only to be met with the trials and tribulations of sidewalk treachery. See our heroes as they swelter in the heat, don't shower, tackle a trio of shape shifting creepy guys, placate a pissed off theater manager, and out smart an annoying party crasher called "The Spoiler" (played by Paul Scheer) who threatens to spill the movie's highly secretive twist. But most of all, see them try to keep their place in line. Catch it on crackle.com. 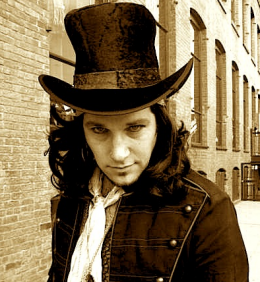 My Damn Channel harbors one of my favorite series of comedies from one of eccentric talents of The State - David Wain. Wainy Days is the ongoing saga of Wain trying to get a date. The episode near and dear to my heart is The Pickup. It co-stars Paul Rudd as the master of picking up chicks. He is too beautiful and funny to be real. Watch it on mydamnchannel.com. 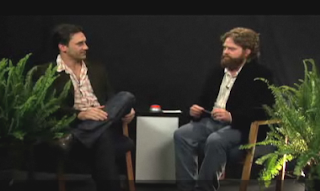 Jon Hamm guests on "Between Two Ferns" on FunnyorDie.com
The masterminds behind FunnyorDie have created a goldmine of original, funny and highly silly comedy shorts online. Of course, The Landlord starring the two year old Pearl and Will Farrell is now infamous. There is so much to explore on this site; however, my personal favorite lately is Between Two Ferns, a three part chat show starring host Zack Galifianakis who interviews Mad Men's Jon Hamm (who appears to be a true comedian at heart), Jimmy Kimmell and Michael Cera. Galifianakis is a frightening interviewer whose questions are uncomfortable and insanely funny. Find all three parts at FunnyorDie. Click on following links: (Michael Cera), (Jon Hamm), (Jimmy Kimmel).

The spectrum of good quality comedy that is comparable to television fare is out there for the plucking. Not all online comedy content is pitch perfect, but if one searches enough, there is plenty to enjoy.
Posted by TVBlogster at 12:25 PM