The Super Duper Bowl: Office to Relieve some Stress 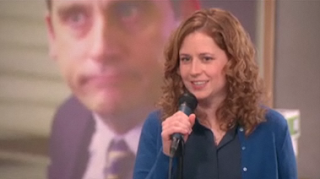 "If it were an iPod it would be a shuffle" so says our Pam Beesly during a roast of boss Michael Scott. A little teaser from last night's Tonight Show where Jenna guested and told tales of boxing workouts and haunted New York City hotel rooms. (I keep Googling the phrase Haunted Hotel Rooms NYC to see if I can find the room she's talking about).

NBC is building up Super Bowl Sunday to be a network fest of football coverage, high priced ads, and lots of prime time promotion, culminating in a very special one hour episode of The Office entitled "Stress Relief". Kath at GMMR and KorbiTV at Zap2It have taken a look at the episode, and were blown away. Jack Black, Cloris Leachman and Jessica Alba will appear as themselves playing characters in a movie downloaded into a laptop of office viewing. Pam gets some bad news about her parent's marriage which will cause a little disturbance in the future Halpert household - but not for long. Dwight sets the office on fire and locks all the doors so he can practice his rescue techniques (why he isn't in jail, we'll never know), making Stanley panic himself into a mild heart attack. Michael tries to lighten the load by organizing a roast of himself, which doesn't go all that well - although if Pam's bit has anything to do with it, the event seems to go just find in my book. Looks like our Beesly is back too, participating in the high jinx. The episode is noted to be hilarious, bittersweet, and back to the old Office we all know and love. I hope so. I will always love this show, even if it tends to fall off track, but if he can get back to that hilarity with wonderful moments of surprise jaw dropping wow-ness as tears well in your eyes kind of loveliness, I will be very happy on Sunday night.

The Office "Stress Relief" will air after the Cardinals kill the Steelers at 10:30pm ET/7:30pm CT.
Posted by TVBlogster at 10:45 AM