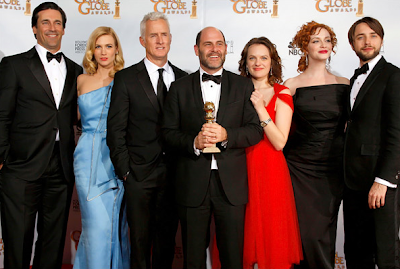 Ricky Gervais should be commissioned to host every entertainment awards show for the next few years at least. Only in house as a presenter, he made a stand in last night's Golden Globes by taking the stage with a glass of lager in his hand, immediately told the chatty audience to shut up, and proceeded to tell the big time film stars that they should have better manners. Ricky puts the pampered in their place. He is the man.

Of all the awards, the GG's may be the most laid back, bizarre event of the awards season. They may border on the ridiculous. Dinner is served. Booze is on the table. The evening goes on and you could have a drunk movie star shouting out something hilarious.

The television nominations themselves are always in question. You can try to convince me all you want, but the constant love given to the pretentious In Treatment and its star Gabriel Byrne is mind boggling. Perennial attention paid to the mildly funny (my opinion, I know) Monk and its star Tony Shalloub escapes my comprehension. Giving 30 Rock a prize made sense. The Office, although not has great as it used to be, still ranks as one of the best, so a nomination was fine. Mad Men winning best Drama was perfect, but snubbing Jon Hamm and January Jones? After the sensational performances they've given us this season? Well, when you see that - you have to wonder. Is the Hollywood Foreign Press Association working with a full deck? According to Nikke Finke, apparently not. Her commentary is compelling.

However, there is always an oddness about the proceedings that makes it must see viewing for fans of the big and little screen. The Hollywood Foreign Press Association seems to be an enigma. Nominations and winners are always questionable, with the glamorous out glamoring others, and hefty money paid into publicity campaigns, it seems as though tht HFPA is easily swayed in chosing one nominee over another. Case in point: Anna Paquin wins for True Blood over Sally Field and Jones? And why is Neil Patrick Harris up against Tom Wilkinson in the same category that mixes best supporting actors in comedy and drama? All congrats goes out to Wilkinson, one of my favorite actors ever, but it's inexplicable to place dramatic and comedic performances in one category. The playing field is unleveled. Not fair.

30 Rock won best Comedy. Tina Fey won Best Actress in a Comedy. Alec Baldwin won Best Actor in a Comedy. Mad Men won Best Television Drama. John Adams won Best Mini Series. Laura Linney and Paul Giamatti won Best Actor/Actress in a Mini Series as well. It was a great night for cable, and a good night for Tina Fey's cast of characters. Tracy Morgan even provided the best speech of the night, claiming that he and Tina came to an agreement that if Barack Obama won, he'd be the spokesperson for the show. His speech made the night, but shined a light on Jeff Zucker, who looked very uncomfortable, and Ben Silverman, who looked like a little boy at Christmas.

I'm all GG'd out, after a night of Kate Winslet winning two awards and sapping the air out of the room with her drawn out, self ingratiating speeches. I kept fantasizing that Angelina Jolie would go up to the stage and slam her with a left hook (taught to her by Mickey Rourke while on the red carpet), to shut her up. It was that kind of night - the kind where you just wanted to imagine more bizarre moments occuring to supercede the oddities and the awkward speeches of those who are fabulous, talented and so very very honored to be there.

I'm glad I follow television. (Although I'm bummed that Doubt didn't win anything. That movie is incredible.) Tear jerking for me was the win of Mickey Rourke for The Wrestler. I love great come back stories, and Rourke has put himself through the wringer. The Golden Globes are more about film than Television. Rainn Wilson kidded by the end of the evening "Hi! We work in television!" reminding everyone that they were in the house too. Oh well, the Emmys will be around next September.

Posted by TVBlogster at 7:14 AM

Wow I am surpised at your reaction to the success of "In Treatment and Gabriel Byrne". I am unsure how you define "constant love" but those of us who follow the show feel its had very little love or attention at all. Unlike "Big Love", or "True Blood", or the hallowed "John Adams", HBO has spent relatively no time, effort or money promoting "In Treatment". Almost a year after the show has ended you still cant even buy the DVDs. I guess they didnt think it was worth printing them.

In fact "In Treatment" and its main star, Gabriel Byrne, have prospered in spite of the lack of love given to the show. Its garnered quite a few Emmy and GG nominations and won quite a few of them too.