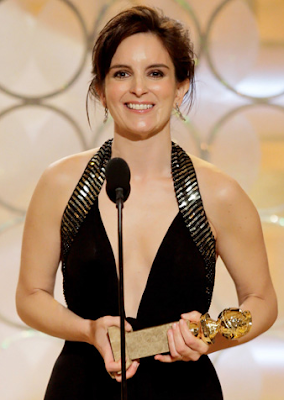 Tina Fey is glorious. I am one of the many fans of Fey-dom who worship the comedy ground she walks on. I always wanted to be a Tina Fey. A writer, a lover of comedy, much like the fictional Liz Lemon, who idolized a ficitious 60's variety show writer named Rosemarie (played by Carrie Fisher in 30 Rock season two), I had my own television idol in Merrill Markoe, head comedy writer of the original NBC Late Night with David Letterman. Well, lets just say my hopes in comedy writing never happened, but I still hold a big soft spot in my heart for female comedian scribes who deal with the hard to crack boys club, breaking barriers by rising to the top of the credits. The fact that Tina became the first female head writer on SNL while also claiming a stake in the Weekend Update legacy was and is a brash achievement. Now that 30 Rock and the 2008 Elections placed her firmly in the public eye, she is riding a grand wave of success. However, with with every wave comes a crash down to shore, where adulation can be met with snarky commentary and personal written attacks. Tina is very much aware of her detractors. And they live right here on the interwebs.

As she stated in her acceptance speech on Sunday night's Golden Globes, if you are tired of all the accolades and the love, go on the internet. You'll find people there who hate you. Under the cloak of anonymity, registered members of fan forums such as Television Without Pity even Gawker can either put you on a pedestal on high, or can rip you to shreds without reason. If they don't like you, man, they do not like you. (I can personally testify that the majority of contributors on those sites adore Fey and her show.)

Tina's shout out to those who can "suck it" pertained to the L.A. Times' awards forum called "The Envelope", a site where various entertainment awards ceremonies are discussed. I personally do not frequent those boards, but industry folk, like Fey and Mad Men showrunner Matt Weiner take peeks here and there to find forumites trash or applaud the talent and the shows they either love, or love to hate.

Tina discussing TV Without Pity and The Envelope with LA Times' Tom O'Neill after the Golden Globes:

It's shame that some deliberately turn on their computers, click to a site, and take the energy to attack people they do not enjoy. It's one thing to not be pleased with an episode, or the way the direction a favored show is taking, it's another to do personal battle. One of the many belly aches of my internet discussions has been an unhappiness with the recent character and plot development of The Office. I spare the writers nothing by saying I'm disappointed in Pam's personality changes or the lack of Jim progressing as an individual in addition to being motivated by his love life, or the over-the-top love triangle with Andy, Dwight and Angela. (Although, I will say, I'm beginning to find a method in the Office writers madness). However, as a fan and writer who loves the creation of dialogue and human behavior humorously portrayed on this program, I enjoy critical analysis. Also, understanding the process of breaking stories and arc progression, criticism can be a beneficial technique. It keeps you on your toes. It's doubtful showrunner Greg Daniels or writers BJ Novack, Jen Celotta or Brent Forester, to name a few, are even reading me, but at least I try to throw positive critques out to the internet universe, whether it's just to vent, or for someone to hear my voice. I do it because I love.

I hate to write hate. If one doesn't like an actor or show because you feel its not funny, then don't write about it. Don't spend time spewing personal attacks on a living, breathing person. Doing so only proves you're jealous and bitter that a nerdy funny chick like Tina Fey cracked out of her duckling phase and became a swan. Cynics don't like success stories. Maybe because success has eluded them.

Yet, The Envelope is getting the final laugh, languishing in their new found fifteen minutes of noriety. Suck it up, nerds.
Posted by TVBlogster at 6:56 AM