The Office: Prince Family Paper or Is Hilary Swank Hot? 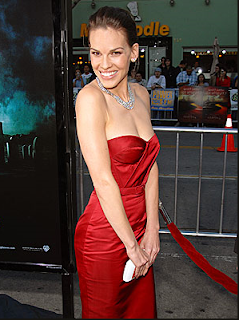 So, is she? The debate raged on in last night's episode "Prince Family Paper".

It's gotten to the point where the network website isn't giving The Office the push it needs today. Two minute replays and deleted scenes are usually available on Friday morning. There is nary a one as of this writing. Last night's episode, "Prince Family Paper" was mediocre. Not bad at all, but not great. When one views The Office, one expects, not perfection, but a level of greatness. This didn't quite deliver, but it wasn't a disappointment either. 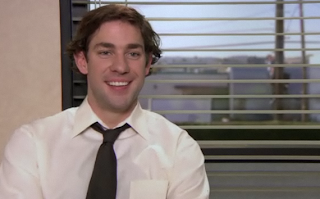 Here's Jim in a classic cold open prank. Notice Dwight on the pole outside.
For instance, the Scranton team debate had a nice ensemble feel. Little verbal gems such as Kevin explaining, "A painting can be beautiful, but I don't want to bang a painting" while weighing the "Is Hilary Hot?" debate was pure Office. Michael's glance at the Hilary photos and tipping the scales in favorite of her hotness was fun. Each team member stood up for a rebuttal. The oddest more meta-like one from Jim, whose talk about celebrity and red carpet presentation was strange coming from an actor who is speaking to other actors who are famously seen at awards shows and best/worst dress list in the real world. I know this is pretend, but still. The clash with the fictional and reality was warped here, but that just might be the Office obsessive me. 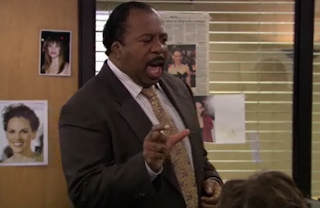 Stanley thinks Hilary is hot. And he only has another 20 years to live, not even...so he's not wasting time on a no hottie
However, the meeting of the Prince Family was a heartbreaker. David Wallace is relying on Michael to do some dirty work by stealing the sales of a local family run paper company, whose claim on the region has been sapping potential money from Dunder Mifflin's ledgers. Seeing Michael going for the juggler by pretending to be a "genius" lawyer in need of paper, while Dwight came along for the support, was amusing, slightly boring, culminating in another exercise in bumbling sillyness at the expense of decent folk. This brought to mind "Branch Wars" in season four, when they visit Karen Fillipelli's Utica branch to steal her top salesman. The familiarity is altered by the difference in tone. Karen knew they were being idiots in their task. This sweet, unsuspecting family hadn't a clue about their intentions. Luckily the family's good grace in helping the duo with a smashed bumper melted Michael's cold, cold heart, making him not want to provide the client list to Wallace. Yet, Dwight forced him to hand it over. And he did.

Perhaps I'm a bit worn out on The Office, but I've grown tired of Dwight and Michael A stories. Dwight has been portrayed as a lunk head, overgrown nerd who uses sci-fi cult fiction and Lord of the Ring analogies to get through life. The guy is waiting for the right moment to book his trip to Mordor. His antics, such as making bombs out of bottles, gasoline and a wick (as in "BranchWars"), his need to cockhold Andy, plus the souless act against the Prince family solidifies his unsympathetic nature. Dwight's breakup with Angela in season four broke down the barrier, providing him with human emotion, but this year has made him hard to enjoy. How does a person like this stay employed? Good sales numbers? In an upcoming episode, he'll be setting the branch on fire so he can provide a safety training situation. How is he not in jail? No wonder why Jim goes through great lengths, such as in the cold open, to prank the living daylights out of him. This is the punishment he's not getting from the authorities.

Jim and Pam. Again? Nothing? No interaction? No discussion of their upcoming wedding? Spoilers for future episode reveal that there will be some interesting developments between the two, but do we have to be starved of the future Halperts goofing with each other, or talking about how stupid Dwight is being now? Giving us a Jim/Pam drought is just not cricket. "Respect the game." 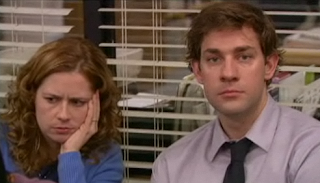 Major beef: Prop Masters, set designers, technology wizards of CGI, please do something about the green trees and palm trees we are seeing around what is supposed to be a bad ass cold, freezing north eastern winter. There are no leaves on trees this time of year. It's a vast wasteland of branches and brown, hard, frozen ground. There is snow everywhere.

Since when are the leaves in bloom in Scranton in January? See them outside Michael's window? 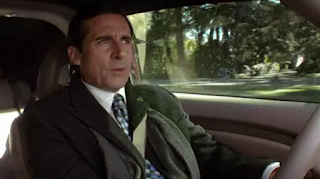 I didn't know palm trees (as seen as round blurs out of Dwight's window) are suddenly sprouting in PA... 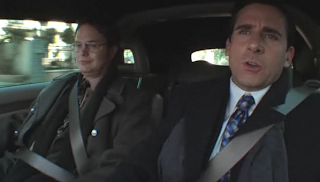 Look, it's understandable that with a crammed production schedule little details will go unattended. There were even slight slip ups in the treasured season two series. Yet, when one episode after the other is showing design and continuity errors, it looks lazy. This is supposed to be a "realistic"mockumentary. Extra effort has to be made. The early Office episodes were so real, the thought that a location was really Los Angeles never crossed my mind - even if I did get a quick glimpse of a fully bloomed tree outside a window in January.

I bitch about this show...because I love.

The next new episode, "Stress Relief" will air on Sunday, February 1st after the Superbowl on NBC. Here's a sneak peek:

Posted by TVBlogster at 8:06 AM

Great recap! I so wholeheartedly agree with you about the green trees! It was especially blatant in this episode, and really distracted me. I'm starting to wonder if it's always been this bad, and I just haven't noticed, or if they've gotten really lazy this season. I know you've mentioned that former prop guy's MySpace page, and even he's complained about this, so I have to assume they used to do a better job. I think I'm going to have to sit down with my seasons 1-4 DVDs and compare.