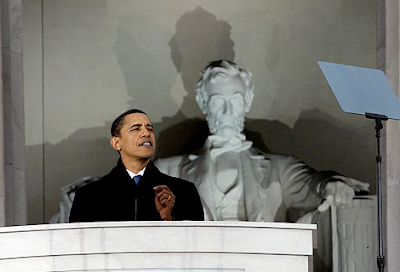 Sunday's concert on The Mall was spectacular. My heart swelled with pride. From Bruce to John Cougar Mellencamp to Beyonce and John Legend - only to name a few - America was represented by the music and the artists so pertinent to the fabric of the United States. U2 - our adopted Irish sons - mesmerized the throng along the reflecting pool.

Tomorrow is the big day. President Elect Barack Obama will be sworn in as the forty forth president of the United States. It's a new era, a new chapter in this country's history. I won't get through it without tears of pride for this country.

Coverage of this event will begin at 5am EST on NBC, with continuing coverage on all networks, all day. Check your local listings.
Posted by TVBlogster at 2:42 PM