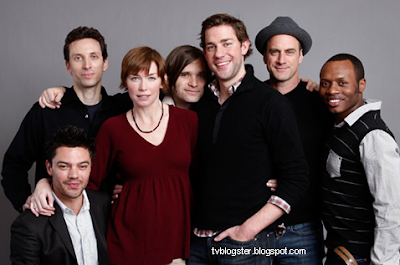 With the entertainment industry's attention focused on the Inaugural activities in Washington D.C. this week, it was easy to forget that the Sundance Film Festival has been underway in Park City, UT. Although TVBlogster doesn't focus on film, it's hard not to discuss the medium when one of its favorite television stars, such as The Office's John Krasinski, makes his screenwriting and directorial debut in a passion project coveted since before the small screen made him big.

Brief Interviews with Hideous Men is an adaptation of David Foster Wallaces' book of short confessional essays that focus on variable elements of the male psyche. With it's dark undertones, humorous musings, and sexual themes, it packed a punch for the aspiring Krasinski upon his first reading several years ago while majoring in playwriting at Brown University, when he was asked to participate in a staged chapter from the book. It was a moment that changed his artistic direction, propelling him to gain the film rights in an act of tenacious bravery and persistency reasonable to any young, stubborn artist: he simply wore down Wallace's agent until she gave in. Considering John was not the famous person he is today, it was a personal triumph. Wallace himself was bemused by the enthusiasm Krasinski displayed, and was intrigued by how he developed a new character in the screenplay, in the form of a therapist spurned by her long time boyfriend (played by Krasinski himself), fleshing out the book's unknown entity to which the male subjects were speaking. Tragically, Wallace would not live to see this film come to fruition, having taken his own life in September 2008.

Brief Interviews was filmed in 2007, and stars, among others, Julianne Nicholson, Christopher Meloni, Will Arnett, Death Cab for Cutie's Ben Gibbard and Rashida Jones. It has gained some positive to mixed buzz amongst critics who've attended screenings at Sundance. Here are links to commentaries and interviews with John Krasinski:


nytimes.com (The Carpetbagger)
filmschoolrejects.com
cinematical.com
theenvelope.latimes.com
indiewire.com (Has an interesting Q&A)
festival.sundance.org (Info on the film and screenings - if you're lucky to be at the festival)
moviesblog.mtv.com
moviemaker.com (Interview w/Cinematographer John Bailey)
saltlaketribute.com
theplaylist.com (Interesting early insight on the film and Ben Gibbard - originally posted in 2007)
EW.com (nice three part interview with John)
Posted by TVBlogster at 8:01 AM