Life On Mars: Must See Stuff 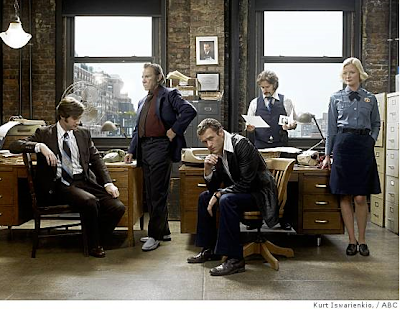 My heart will always be with Mad Men when it comes to current drama, but it now has a little competition. ABC-TV's Life on Mars returns from a two month hiatus next Wednesday at 10pm ET/9pm CT. It's an American adaptation from the highly acclaimed BBC Series, and it's a tour de force in network television drama.

The premise: A New York City detective, out to find a serial killer in 2008 gets hits by a car and falls into a coma . He is plunged into another era as himself, in the same precinct ... in 1973. Jason O'Mara stars as detective Sam Tyler, and is a composite of Paul Newman and Steve McQueen in a 70's portrait. Harvey Keitel plays Lt. Gene Hunt, the hard bitten, crooked 70's dick (and I do mean dick) who welcomed detective Tyler upon his arrival with a swift pummeling for shooting off his mouth. Gretchen Moll plays Policewoman Annie Harris (aka No Nuts), who still lingers in the outskirts of acceptance as a woman smack dab in the middle of a police boys club. Michael Imperioli sheds his Sopranos skin, enlivening the cocky detective Ray Carling.

Life on Mars gives you that television cop drama feel with a gritty, funky musical soundtrack. The stories are set up with David Bowie songs and AM transitor radio buzz as metaphors, while Detective Tyler tries to solve the mystery of his own past. Is he in another dimension? Or is he languishing in a deep dream within his coma? This ethereal twist is woven with retro time lines of old television prime time. It brings you back to Mannix or Cannon, Hawaii 5-0 or Kojak. The streets are mean, the polyester is fierce, cops don't live by the rules, and New York is a bankrupted dump. Oh, 70's. Such memories. This superb cast makes this show a stunning, heart stomping trip down memory lane - if you're old enough to remember.

Last we left off, Sam was being summoned to the basement... (musical sting...yet spoiler free for the uninitiated).

Email ThisBlogThis!Share to TwitterShare to FacebookShare to Pinterest
Labels: Life on Mars