SAG Awards: Is It Getting a Little Boring in Here?

We are smack in the middle of awards season, and I'm already bored to death with the red carpets, the actresses turn models on the runway, pointing their Jimmy Choo's and flashing their Chopard borrowed braclets.

The only cool thing were presenters Krasinski and Poehler renacting a scene from Revolutionary Road that picked up the pace for....one minute and forteen seconds.

The rest was just self congratulating, tiresome drivel with only a few yippees for personal favorites, and mild, GOB Bluth-like "Come On!" shout outs for those winners less deserving, in my humble opinion. I'm a very biased TV viewer and commentator. 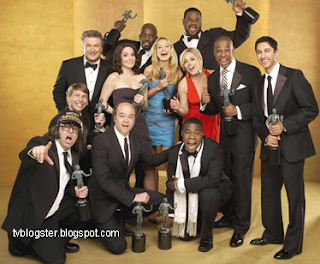 Ok, so 30 Rock did take home the Best Ensemble in a Comedy award last night at the SAG Awards. It's my favorite show, so I'm incredibly pleased for Tina and her crew. I shouldn't have expended so many words over Lonnie Ross and his absence when we there are others involved in the creation of such a great sitcom. Jane Krakowski is goofy fun. Tracy Morgan is insane. Judah Friedlander is all kinds of crazy, and Alec Baldwin is a tour-de-force in the comedy world. Speaking of which - it was lovely to see him with his daughter Ireland. She is so beautiful, and he dazzled with pride and happiness with her by his side.

It seems that the wonderful work of Steve Carell will be shuffled aside for the man who portrays the acerbic, quick witted, terrifically sexy Jack Donaghy. Unless the writers of The Office start cranking out better scripts, Baldwin will own this award whether it be Emmy, SAG or Golden Globes. I'm conflicted between Carell and Baldwin. I love them both, and hope some mythical god will allow tie wins in a category. Nevertheless, Baldwin deserved the win last night.

Also, a category of personal interest was Best Male Role in a Television Drama. Hugh Laurie and I go way back. I've followed his career since A Bit of Fry and Laurie hit the BBC back in the 80's, and continued to trek through his amazing comedy work; however, I wanted Jon Hamm to get this one. Don Draper feels more like damaged goods than House, considering the era in which he lives. Congratulations to Laurie, but I am sorry Hamm got slighted again.

Another sadness is Elisabeth Moss' snub for Best Supporting Actress in a Television Drama. That went to Sally Field. Judging from the clip from Brothers and Sisters, it looks like screaming hissy fits and tears made fellow actors happy to vote for Sally. Field is a treasure, don't get me wrong, but doesn't she have enough of these things? Moss' portrayal of Peggy Olsen on Mad Men is a subtle, elegant experience. SAG showed a clip from the marvelous season finale, where she tells Pete about their baby. Her eyes and voice projected more emotion and said more than any loud, eat-the-scenery performance ever will. Moss was robbed.

However, Best Television Drama went to Mad Men. Well deserved, of course. After all, I'm very partial to this show. 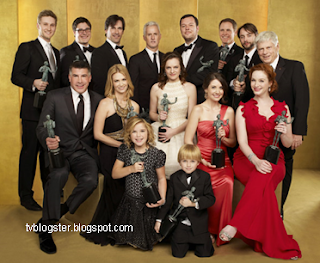 After that was wrapped up, I turned over to HBO for Flight of the Conchords, which wasn't boring at all. In fact, it was hilarious, and the music was excellent. I'll gear up another post about the boys soon.

Photos courtesy of WireImage
Posted by TVBlogster at 10:01 AM