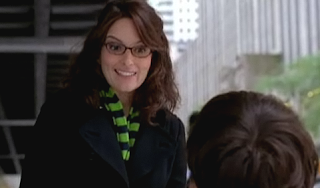 Love is in the air at 30 Rock. Tracy Jordan, porn video gamemaster and comedy hero, made more money this past year than the U.S. deficit and the War in Iraq combined. Yet, he's worried Mrs. Jordan (Sherri Shepard), who has tired of his extra curricular booty calls, will divorce him, clean out his drawers and take his golden shoes. Angie is the nuts to Tracy's crazy. She's never going to leave Tracy. Never. Ever. "I'm gonna watch you die." This is Jordan foreplay. It's starts to get all hot in this place. Tracy warns all that they can stay or go, every man for himself. Sex is imminent. People evacuate, keeping hands to their sides, and filed out in a straight line. An uncontrolled second sex hump-fest starts a bit later in the studio hallways. This time the alarms worked, and everyone departed safely as sweet Jordan love is made on the page desk at the studio door. Poor Kenneth wasn't so lucky, and remained with his back to the carnage. Frank hangs on to watch - because that's what he does. 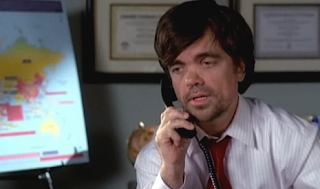 Peter Linklage as U.N. guy who's about to "shut it down" with Liz

Liz Lemon's biological clock has been bonging like Big Ben on New Years Eve. Everywhere she goes, the cooing burble of babies and and the tussled hair of little tykes make her heart go all aflutter. It drives her to stroll sixth avenue pinching the cheeks of children, stealing dropped baby shoes and ruffling the expensive haircut of a handsome, successful U.N. professional who happens to be a dwarf, played by the awesome Peter Dinklage (The Station Agent). Oh, Liz. What will the Roloffs say? But it's a mistake made in heaven, only to land in hell once her motherly instincts hit the fan. Protecting him from fire and making sure he's careful crossing the street isn't the way to interact with an adult little person, Liz. Even re-enacting the Sex and the City movie moment of meeting on the Brooklyn Bridge goes awry when she mistakenly hits on another kid thinking it's her new hunk, only for her U.N. boyfriend to see her faux pas. It's a shame she can't hide. When you can't tell her date apart from a six year old, you're done. He would have been a kick ass boyfriend too - albeit a highly sensitive and serious one. Looks like Liz will die alone. 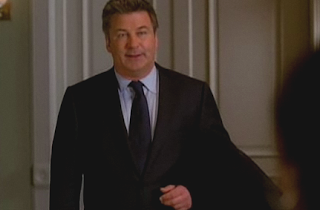 Jack is going to do it alone, thank you very much. Now excuse him as he readies for a date with a brittle blonde Fox New Anchor.

Mother Donaghy is still the thorn on the side of her son. She's living in chez Jackie's fancy apartment in New York while her hips heal. We don't see the marvelous Elaine Stritch, but we hear her, shouting off camera to be dried off in the tub. Fed up with wrath of Mother Colleen, and mortified by watching her walk around in depression era underwear, he hires an elder nurse named Elisa (Selma Hayek)... 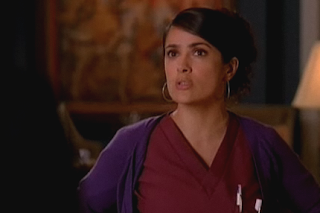 ...who is hotsy totsy under her scrubs. 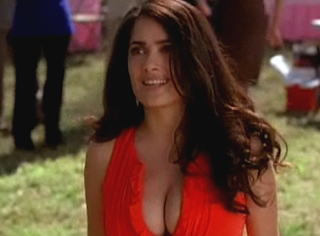 She eases the pain of elder care by diverting Mother's attentions off Jack and onto sleep and more sleep so he can go find a life. But Jack wings it alone, spending wasteful nights in high class restaurants on dates with vapid Fox News blonds who eat boiled water and bones for dinner. That's no way to live, Jackie boy. When Jack finds a lump in a very delicate place, examined by Elisa, the cold steely Republican stoisim is shook.

It takes a visit to Elisa's loving family gathering, where he is welcomed with a baby and food respectively, plus a gander at some major nursy boobage, and her sane wisdom on how one should not go through life alone, to realize he's in love. She reciprocates. Jack's lump is benign. He'll live, but one day, he won't die alone.

Meanwhile Jenna is vying to star in a biopic on Janis Joplin, only to mistake the production for something not real.

Terrific show, as always. Liz continues her quest for love and a baby, only to be so socially inept that she fails. We continue to root for her. My hope is that the upcoming storyline with Jon Hamm as her gorgeous neighbor doctor will bring some joy to Liz Lemon. The sadness is - Hamm won't be a regular, so I fear a possible relationship will either be averted or short lived. It keeps her the nerdy librarian lady we all know and love.

And oh how I love to see Selma Hayek as Jack's new love! Here's hoping this is "the one" for Jackie-kins. Elisa puts Mother Donaghy in her place, so they'll be no ire from her, plus she's hot, she's smart, and I think Jack has met his potential trophy wife match.

NBC's Two Minute Flashback (with some good stuff missing from the episode):

Next week's episode: Flu Shot
Posted by TVBlogster at 6:10 AM