Amy Poehler' Not The Office Spin Off at TCA Press Tour 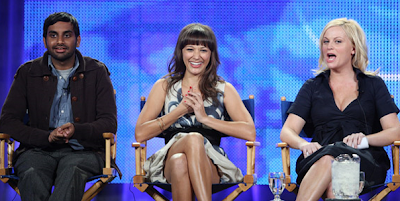 Cast of untitled Amy Poehler sitcom: Aziz Ansari, Rashida Jones, Amy Poehler at TCA Press Tour
What a wonderful bunch of months this has been for Amy Poehler. First, SNL goes through the roof with the 2008 Elections, then the birth of her son Archie, all culminating in her new sitcom, ready for production with an April 9th premiere date on NBC. The only thing missing is the title, but that is surely to come.

The TCA winter press conference continued in Universal City this week. Poehler and her co-stars Rashida Jones and Aziz Ansari took the stage at The Hilton with Producers Greg Daniels and Michael Schur to discuss the premise of the series. The show will be filmed in the mockumentary format similar to The Office. It takes place in the Parks and Recreation Department of Pawnee, Indiana. Poehler plays a bureaucratic boss named Leslie Knope who tries to advance her career by helping her friend(played by Rashida Jones) change a construction site into a park. She meets up with testy residents, developers and other challenges.

Various members of the TCA received scripts for the pilot episode, such as TV Guide and The Pittsburgh Post Gazette.

Greg Daniels, showrunner for both The Office and the Poehler project has mentioned there still may be an Office spin off in the future.

An Excerpt from link:
"It's not possible, physically, for me to be involved in it right this second, but I'm talking to people over at The Office about another idea, and [The Office's British creator] Stephen Merchant came back and directed an episode of The Office so were were talking about the idea," Daniels told critics at NBC's annual Television Critics Tour on Thursday. "It's possible that some combination of other Office people could produce it without my giving blood for it."
Posted by TVBlogster at 9:52 AM