30 Rock: Working on the Night Cheese 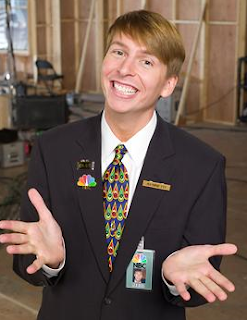 Yes, the star of this episode "The Ones" was obviously The Slanket, the durable, warm cozy blanket with sleeves that The Snuggie people ripped off. Watching Liz down a platter of cheese at 4am looking like a monk, singing Bob Seger inspired songs about her food was downright Lemon-icious. And when Elise asks "Isn't there a Slanket somewhere that needs you to fill with farts?" (paraphrasing) my evening of comedy hit the epitome of hilarity (Can I use that word enough?) But the real star for me was that cute, blond, southern young man, the man who fetches water and feeds Tracy's snakes...He's so wonderful in each episode that I just can't contain it anymore. Kenneth. Kenneth the Page.

"My real name is Dick Whitman."

These words could never come out of Don Draper's handsome mouth and make me gag with laughter. Oh, Kenneth Parcel. The ever loving, whimsical and lovable NBC Page. He'd take a bullet for you. Or he'd swallowed a dreaded strawberry, to which he's horribly allergic, and succumb to an anaphylactic attack for you. He did it for Jenna, who, unbeknown to him, laced his sandwich with the feared berry to entice a cute EMT return to the studio after Lutz freaked out and bounced off a wall with his head. When Kenneth voluntarily agreed to drink strawberry infected water later on so Jenna could tell 9-1-1 to get the cute guy over there, it was akin to him falling down the stairs for Tracy Jordan in season two's finale. There is nothing Kenneth wouldn't do. If NBC gave out purple hearts, Kenneth would be covered in them.

Selma Hayek was back as Elise. We find out her big secret. In the Latin world, she's known as "The Black Widow", a dark haired beauty who killed a previous husband, and is basically all kinds of unstable nuts. Even though her break up with Jack was a bit too neat, what the hell? It's 30 Rock. The show has a built in sense of absurdity. They can get away with easy, tidy endings. However, the theme of "The One" popped up many times. Jack admitted that Elise's "The One" as he spends a night out on the town with Tracy to test his faithful muscles. Also, Jenna, in her flakey fickleness states the cute paramedic is "The One". Tracy, always in some kind of marital upheaval, admits that when he first laid eyes on Angie in that Arthur Treachers years ago, doling out extra fried fish as they gazed in a fit of heated passion, she was "The One". So, hence..."The One's"...plural.

And Liz...well. Dr. Baird is hiding somewhere in her building, or perhaps he drove off in his bubble-cycle never to return. But Liz didn't have a "one"last night. In fact, she was kind of low key in this episode, allowing the others to shine. No fear, the lady will be at the forefront again. Perhaps Dennis Duffy will come knocking on her door with donuts? However the scenario unfolds, as for Liz...the cheese stands alone. For now.

Here's a highlight of Jack's night on the town with Tracy and a little Brian Williams too:

Posted by TVBlogster at 7:47 AM