The Office: Broke, But Back! 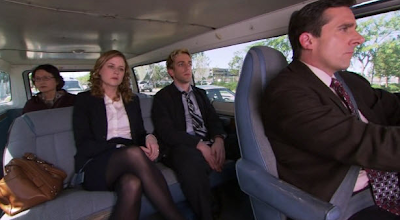 Ok, so maybe that was a bit too easy. Most companies don't buy out a small company only in business for a month. Also, adding more people to the payroll (especially one who committed corporate fraud for your company) isn't realistic in today's world. I'm sure that Andy Buckley, the actor who portrays David Wallace, and is in real life a Merrill Lynch executive probably knew this as his character offered Michael the world. After all, does Scranton need another sales person in Pam? Could more research have found that the Michael Scott Paper Company was underselling it's product and not making a profit? Yes. However, I'm going to stop being hard on The Office here. It is a pretend world among the Dunder Mifflin-ites. Last Thursday's episode "Broke" was filled with warmth and sweet, tactful revenge. It might not have been the most hilarious, and frankly, this show isn't always built on knee slapping yuks, but the result brought back Michael, Pam and Ryan into the fold of the branch, and all is right with the world.

Not only is the team back, but Jim got his conjones returned to him as well. As David Wallace crossed the threshhold of the Scranton office, Charles went into shameless kiss ass mode, much to Jim's delight....

As always, it's nice to see how Wallace respects Jim. Ignoring Charles' bad call on Halpert ("He's a bitter disappointment"...what!?) he asks him to join the pow wow. And thus we got to see the fall of the Charles and Dwight empire. All they had to do was be themselves. Jim was cool as a cucumber and knew his stuff. Dwight was the dumbass as usual, talking about bees and revenge and how they could capture the queen and create havoc. Charles was left in the dust, clueless, yes-ing David's suggestion for a buy out. "Yes, I was just about to say that". "But you didn't" said Jim. Who's the "bitter disappointment" now Minor? Who's the idiot now, Dwight? No wonder the emo, ironic loving Jim has your "Idiot" voice as his ring tone. Jim snapping into action to broker the deal between MSCP and DM was sublime. Punctuated by his melting look at his soon-to-be betrothed, beaming "Told you...it's gonna be alright" was incredible. Jim probably got some "nice-nice" from Pam that evening.

As for Pam, your heart had to go out to her. She took a big risk, and appeared to be losing faith in Michael's venture. With a wedding coming up and lack of funds, even getting extra work at top chain department stores proved impossible - deflatingly so. However, give him some props, Michael, when working under pressure, is like viewing an idiot savant adding up numbers in a gambling den. Not only did he get a better deal than anyone expected, but he showed his true devotion to the people who took a chance on him: Ryan and Pam. It was lovely.

Of course, everything ended tidy, but sometimes you have to put all disbelief aside and allow the improbables to unfold. Everyone is back home. Pam is out of her stagnant receptionist role. Charles has left for New York. Michael is in charge. Jim is the man again.

Honorable mention: The Korean ladies who kept thinking the MSPC van was the bus to church... 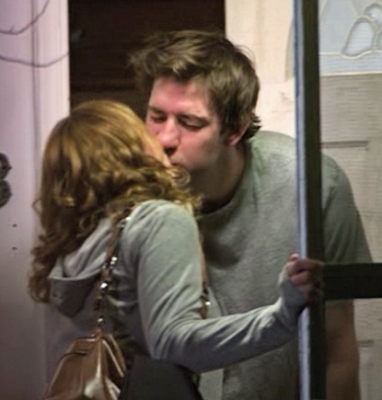 Here's a highlight clip from "Broke":


Also, the first deleted scene is a good one. It looks like the original cold open: