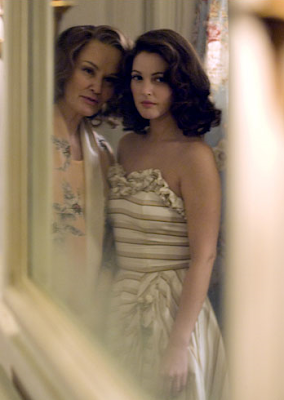 Jessica Lange and Drew Barrymore as mother and daughter Beale
I'm looking forward to HBO's original production of Grey Gardens which airs this Saturday at 8pm et. The cast is strikingly spot on. Drew Barrymore looks like a mirror image of Little Edie Beale and Jessica Lange looks so convincing as the older version of her mother Big Edie, that when I view the trailer, I forget if I'm glimpses of the HBO theatrical and not the famous documentary.

For those unfamiliar with this fascinating story, Edith Bouvier Beale and her daughter Little Edie Beale were the aunt and cousin of Jackie Kennedy Onassis. They lived together in East Hampton for decades at Grey Gardens, a beautiful sprawl that belonged to Big Edie exclusively. A high society grand dame, Big Edie's life was swell until her very wealthy husband ran away with another woman, cutting her off financially, leaving her a paltry $150 per month allowance. Her daughter Edie came to live with her, mostly against her will - or for her own survival. As the money dried up, the gorgeous beach home eventually fell into disrepair and the mother/daughter team lived in self imposed squalor as raccoons filled the attic and feral cats multiplied and peed over every inch of the place. 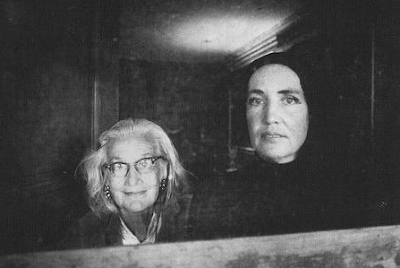 The real Big Edie and Little Edie (1975)
In 1975, after Jackie helped fixed their home, which averted their estate to be condemned by the county, David and Albert Maysles, film makers who documented The Beatles first tour of the US, filmed the Beales in their dilapidated home. The documentary Grey Gardens was a fascinating glimpse into the ladies' sequestered, life, where they were staunch (s-t-a-u-n-c-h) in their independence and open to sharing tales about their past (mostly through bickering and over singing each other). Their strange existence begged the question - what caused them to run the beauty of Grey Gardens, and thus, their lives into such filth? Do we as a society judge them? And why force Little Edie to retreat with her mother on the Island, and why did she stay so long? As she said, "The hallmark of aristocracy is responsibility." There must be more to that statement than meets the eye. The HBO feature on Saturday will hopefully give us fans an idea of what she meant.