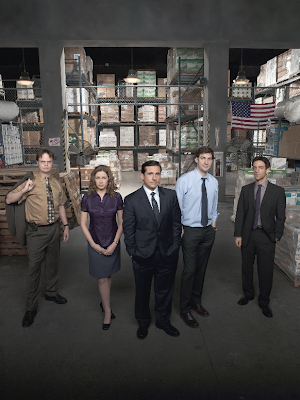 Let me preface this by saying...I love this show. I love this cast. I adore everyone behind it. I rant because I love. This also a very long rant. The reason I have a blog is so I can shout my antsy, cranky feelings to the ether, and if someone wants to read it...terrific. I could be wrong. I could be right. I could feel totally different a few months from now. Here goes:

The consensus among fans across online bulletin boards, is the two episodes of The Office that aired last Thursday, “Dream Team” and “Michael Scott Paper Company” were incredibly good, so good in fact, that shouts of "Our Office is back!" and "I laughed so much, my cheeks hurt!" speckled discussion threads everywhere, overtaking the few who voiced aggravation over the direction the writers are taking with characters. Yes, the episodes were decent, some great moments were had. Pam voicing her doubts about Michael's company was very human, and Michael's lucidity while providing Pam a heartfelt pep talk was moving if not surprising. The opening titles of “MSPC” was hilarious; even the shot of John Krasinski playing the part of Jim Halpert’s picture on Pam’s desk was sublime in it's humor. However, I couldn’t help but feel emptiness in these episodes. So many established character dynamics are missing, so many loose ends left untied. Although the writers are right changing the Dunder Mifflin scenario by having Michael leave DM, I'm disappointed with how the writers are cultivating the characters within, and I fear they will unfold the current story into a sitcom fantasy where the little guy wins the day despite the harsh realities of this bad economy.

I had enjoyed the addition of Idris Elba's Charles Minor as the hard ass boss, but his heavy handedness is becoming exasperating. Narcissistic, detached, unfriendly, demanding, he'd make a great drill sergeant. Yet, as a manager, it's obvious David Wallace has failed again in filling that VP position with a well suited professional. Charles is clueless about people, blind to the nuance of organization, and allows his bias to cloud his vision of people - namely Jim, whom Charles terrorizes for sport, by demeaning him when he speaks. Meanwhile Andy and Dwight are playing banjo and guitar on "Country Roads" in the break room with nary a peep from Major Minor. (Kudos - Helms and Wilson do rock the pantry). 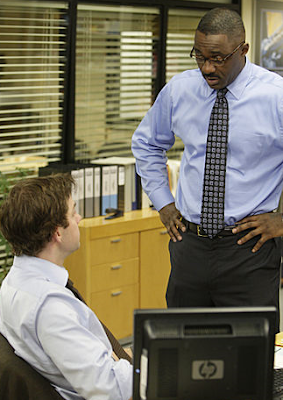 What are the writers doing to Dwight Schrute? He was always a pain in the ass, brown nosing geek, but there was a sensitivity written into his vibe that made you love him nonetheless. Now, he is the most insufferable, annoying nerd to come down the prime time television pike in a while. Call me humorless, but I don't find his antics funny. He's committed arson. He's obstructed emergency exits after committing said arson. He plants police grade weaponry around the office (ok - so the Mace helped in saving Jim one day, but that was a small fraction of his arsenal). Dwight is a cartoon. He is not human anymore. He's not the geek I want to love and hate but mostly love. 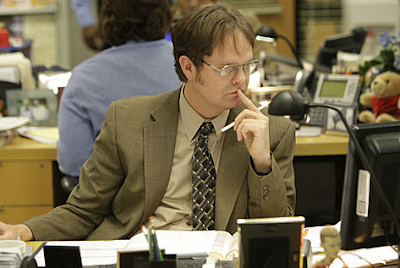 Also, I didn't enjoy the Andy-Dwight dynamic in the second episode. It was funny in “The Merger” when they first met and dissed each other's cars. It was amusing and sad in “The Duel”, when Andy drove his Prius into Dwight's knees, but their interaction is a time waster falls flat. I fast forward their scenes. (Same with the "Cornell" interview Andy conducted with Dwight earlier this season. Snore. Sorry, guys.)

As much as I like Michael and Pam as a team, too much of it frustrates me. It takes away any Jim and Pam interaction. There is no more of that lovely Beesly/Halpert "partners in crime" interaction that lent a modicum of stability, solidifying the heart of this show. Having Pam decide to leave with Michael, to continue to be his mother from nine to five doesn't seem like personal growth for Pam, it feels like she's sticking to the same old business. Jim seems to be in need of emotional support right now, but Pam's decision to quit and join her other boyfriend has put her in the position to always be there for Michael more than for her fiancée. That gets old, and after all those years of wanting Pam with Jim, their official coupling and engagement has been fraught with lost opportunities and disappointment.

Who is Ryan Howard? Where did he go? 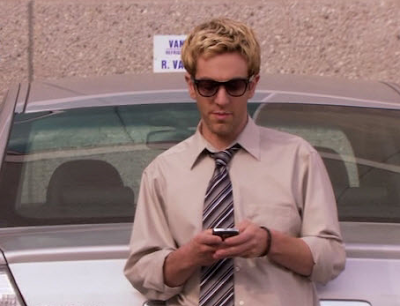 He used to be the stuck up graduate school student who had designs for owning a business. Ryan was an ass, but he had a plan. He had intention. He was a horrible salesman, but he seemed to have the ideas and the knowledge to take on more responsibility. He was mistakenly made VP of the North Eastern Region of DM. He then became a coke head, committed corporate fraud, and is somehow still in the DM universe. Now, he’s a skeevy drifter who slummed it up in Thailand. He has a sense of entitlement without putting in the work. This guy – who used to look at Halpert as if he was wasting his life - is now the most useless bit of human waste ever produced. It’s like the writers didn’t know what to do with him, so they destroyed him.

As far as the MSPC's fate, I don't want to cheer against these characters; however, in this depressed economy, Michael should not be able to succeed. Better business owners have tried with more preparation and failed. If this show is to cater to the story of the “Everyman” (with which I fear it may have lost touch) having him be a legit competitor to DM would be a slap in the face to all business owners with more gumption and preparation who’ve failed. It would mean the writers are creating magic money and fantasies-do-come-true rainbows to make everything all hunky dory.

And Jim. What are the writers doing to Jim? 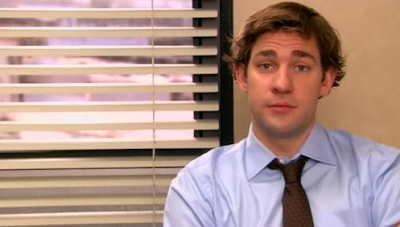 Jim's looks into the camera are affirmation that the insanity around him shouldn't be taken seriously. When the writers cut him down to a wimp who stammers at every motion Charles makes, forgetting all his intelligence, then who do I turn to when the sanity flairs up in this show? Jim was the one who placated Michael. He was the one who hangs out with Kevin and makes him feel cool. Jim was our stabilization in this den of misfits filled with ornery salespersons, substance abusers and the bored. When the writers make Jim the fool, then where do we hang our empathy? On Michael? A man whose building a business based on nothing? Dwight? The super hero of Scranton? Angela? The cat lady who gives hypocrisy a bad name? Pam? The girl who spent three to six months in New York studying art, only to have the story abandoned so she conveniently becomes a sales person and Michael’s foster mother? Ok, well, maybe we can look to Pam. She does have some strength to allow us some sane common ground.

Do fans really hate Jim so much that we need to gloat over the fact that he's getting some kind of comeuppance by being verbally beaten down and intimidated by Charles? What people see as negative traits, I see as a detachment from the petty silliness that goes on around that office. What other people see as cruel pranks to Dwight, I see as harmless retribution toward a total idiot. Yes, there were times I've hated Jim. In season three's “Beach Games”, he was a total smug dope because he got to the point where he thought he was too good for the DM crew, and was ready to move on to NYC with Karen to make a new life, leaving Pam and all that baggage behind. But he stayed, took a chance with Pam, and has settled into being one of the crew. Maybe he's not perfect, or the golden boy, but that's no reason to humiliate him. Somebody, please write him a scene where he shows some vinegar and defends himself. Jeebus, what else are we going to hang our hats on?

Perhaps it's just the Monday Blues because this is just a TV show and I'm giving this show a beating. But the fact is, it’s hard to find good, smart television today. I enjoy the creation and deconstruction of a good storyline in episodic television such as The Office. The show has held onto a fervent, dedicated fan base to which I'm a member. When a program that once gave us good comedy suddenly veers off the road, it's disappointing. Although Michael leaving DM to start his own company has potential, I fear that since the writers have gone overboard with devices before, they may steer this story into a fantasy land, just to provide laughs to audiences who hunger for the three camera comedy rhythm.

If they could only clean up the character traits of some: Make Angela tight assed again, give her some emotional fallout from her own actions so we can empathize with her. Tone down Dwight's goofing off so we can agree with him when he says someone is a slacker. Make Charles as bitchy to those wasting company time as he is to Jim. Make Pam want to do her art again. Make Michael fail at this half ass company so he'll be back somehow. Too many people have remained dedicated viewers, and the broad humor and contrivances, especially the way woman on this show are portrayed as silly or emotionally disturbed (with the exception of Pam), has been a little insulting.

However, having ranted enough, “Dream Team” and “Michael Scott Paper Company” had some positive moments. It was fun seeing two new episodes in one night. Despite my misgivings, the episodes were serviceable; however, perhaps I’m getting a bit burned out from The Office because seeing yet another broad bit of humor in the guise of Dwight’s naked torso and underwear in the promos for next week’s episode “Heavy Competition” didn’t give me reason to want to tune in again. In fact, I may be close to following some fans advice to downers like me. "If you don't like the show...don't watch it." Sounds like a possible plan.

Posted by TVBlogster at 6:41 AM