Webisodes Get Their Due: The Webbys 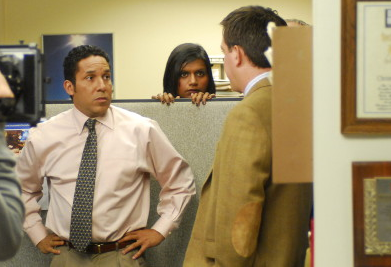 The Office's Webisode Series: The Outburst

The 13th Annual Webby Awards will be held on June 8th at Cipriani Wall Street in New York City. SNL head writer and Weekend Update anchor Seth Meyers will be returning to host the festivities. The Webbys are becoming quite a prestigious award among the chattering and creative world of the internet. The prizes are given out to various sites that fall into different types: News, Information, Blogging, Health, Travel, etc... Yet, the one that really impresses this blogger are the original comedy webisodes that have gained some recognition by visitors and the Webby board alike.

Under the vast multifaceted category of Film and Video list a bevvy of sub categories such as Best Writing, Editing, Reality, Hosting, Individual Short, Individual Long. The list is mind boggling. Either that - or I've hit the Starbucks a little hard this morning. Nonetheless, there are a few made for web comedies that have been given a nom.

One original series that I have tauted with much love is TheWB.com's Children's Hospital which garnered many Webby nods thanks to a terrific cast that includes Megan Mullally and Rob Corddry. Corddry also co-wrote and directed the series. He's been nominated for Best Individual Performance, and could beat out the competition, which for some reason, he shares with Sarah Palin. (The Webby selections can be rather... odd).

You can watch Children's Hospital at http://www.thewb.com/shows/childrens-hospital/episode-4/911abe52fb. You're guaranteed to laugh your ass off. 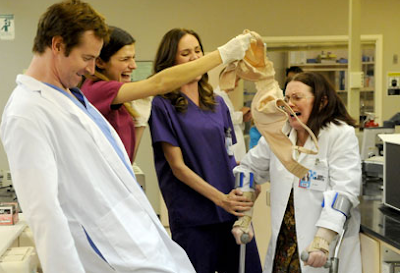 Yes, that is Rob Huebel, three ladies and a bra. A scene from Children's Hospital

As the prime time season winds down for The Office, a small group of writers and cast members get together to create online webisodes that are usually five part (or more), two minute (approx) scenes that make up a series to stream on NBC.com.

The Office might be pioneers in the world of webisodes when they first streamed "The Accountants" during the summer of 2006. Until then webisodes were nowhere to be found, or just hitting YouTube, lovingly home made by comedians and actors. The Accountants won a Webby, and more summer online shorts were created, such as "Kevin's Loan" which originally streamed last year. The most recent webisode "The Outburst" is nominated for Long Form or Series, competing against Children's Hospital, so we're dealing with a comedy cut throat situation. However, despite my Office love, I'm not a big fan of their webisodes since the focus is on secondary characters with nary a Krasinski, Fisher or Carell in sight, making it lack the meat of the line up I love so much. Yet, they do have a dedicated following, are well made, maintain good Office buzz when the show is off air, and provides a spin off look into the characters who don't usually get the spotlight.

Another interesting nominee is Web Therapy starring Lisa Kudrow who portrays a therapist that conducts sessions via webcam. The incredible Kudrow also co-wrote and co-produced this unique series that is up for Best Writing. You can view Web Therapy at LStudios.com: http://lstudio.com/web-therapy/index.html

The Webbys are opening up the ballets for people's choice participation. If you want to vote for a favorite web series go to: http://pv.webbyawards.com/ballot. You have to register to participate. Today is the last day for voting.

Speaking of Web Series: The Office is continuing it's webisode trend and will be unveiling their new mini-series "Blackmail". It features the very creepy Creed (Creed Bratton). Written by Jonathan Hughes and Nat Federman, directed by BJ Novack, it premieres on May 7th on NBC.com.

Posted by TVBlogster at 7:48 AM

Email ThisBlogThis!Share to TwitterShare to FacebookShare to Pinterest
Labels: The Webbys