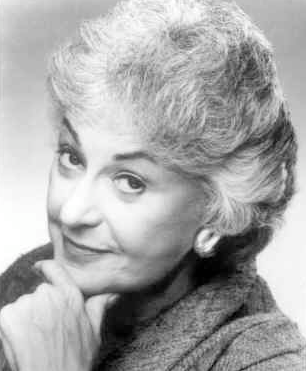 Bea Arthur passed away this past Saturday at her home in Los Angeles at the age of 86. There is no doubt that she was one of the great comedic talents known for generations. Although she started out on Broadway, having tread the boards as the drunkenly flamboyant Vera Charles in Mame and the yenta-ish Yente in Fiddler on the Roof, she came to fame as cousin Maude in All in the Family. The brass at CBS loved her so much, they gave Executive Producer Norman Lear a call, claiming that "that lady" is a show waiting to happen. And then there's "Maude", as the theme song says. It was the early 1970's. With women's liberation at its boiling point, it was a role that was very much of its time. Bea Arthur's blazing comedic timing and bold charisma enlivened Maude's political nature, stirring much controversy. Indeed, the character broke down television barriers, one example being the famous abortion episode where Maude and husband Arthur decide not to take a surprise pregnancy to term. That was edgy television back then. In fact, it still is for a prime time sitcom.

In 1985 she embarked on another successful iconic series The Golden Girls where she was reunited with Maude co-star Rue McClanahan, and teamed with Betty White and Estelle Getty. Her character Dorothy Zbornak still held the vim and vinegar of Maude, but dealt with the grace of getting older and finding solace in the warmth of friends. Her comedic rhythm and sharp zings were as precise and hilarious as ever.

After The Golden Girls finished it's run, Ms. Arthur never retired from acting. She appeared in a one woman show on Broadway in 2002 where she sang cabaret and told stories about her life. She appeared in various shows sitcoms such as Malcolm in the Middle.

On a personal note, I was an NBC talent intern back in 1985 when the Golden Girls first premiered. I had the opportunity to meet Ms. Arthur a few times. She was the most elegant, graceful woman I've ever met, endearingly soft spoken and surprisingly shy. She seemed to come to life when the cameras and the spotlights came on. She lived a life that provided so much laughter and thought provoking satire. A life well lived. May she rest in peace.


All in the Family (Maude appears 2:09, but this whole episode is classic.)

Best of Dorothy on Golden Girls.

Bea Arthur as Carrie Bradshaw, from the TV Land Awards...HI-Larious.

Posted by TVBlogster at 8:12 AM