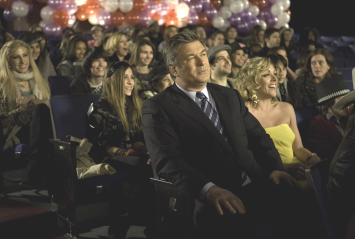 Remember last week when Liz got her freak on with the cost cutting accountant (played by the fab Roger Bart) and bartered her body to save everyone's job at TGS? Well, according to NBC/GE and Sheinhardt Wigs' HR department, that is known as being a filthy whore. It's also known as sexual harassment, and with sexual harassment comes punishment. In tonight's episode "Jackie Jormp Jomp", Liz Lemon is riding out a two week suspension without pay, but not without trouble. Apparently, she loves the stress of the show, and misses every anxiety inducing moment of it. How will she fill her days?

Jenna's Janis Joplin bio-pic is being halted by GE brass, probably because the lack of song rights forced production to rename "Joplin" to "Jormp Jomp", and forced Jack to re-write all the lyrics to her back catalog of songs. ("Take a piece of my lung now, baby!"). In other words, it sounds like it sucks pretty bad. To right this ship, Jack has Jenna use her celebrity status to create some promotional buzz.
30 Rock never fails to provide the funny. Watch it tonight on NBC at 9:30pm et after The Office.
Posted by TVBlogster at 7:23 AM