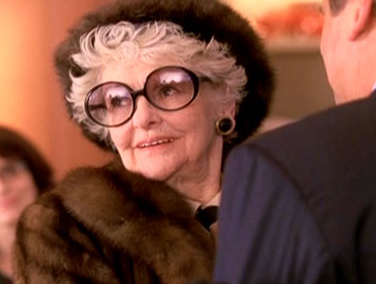 Hurrah and huzzah! Elaine Stritch is going to be appearing in tonight's episode of 30 Rock entitled "The Natural Order"! I'm beside myself with anticipation. Whenever this lovable old broad graces Liz Lemon's set, mingling with Jack in her crabby but lovable Mother Donaghy way, it is indeed, the natural order of things. The role was made for Stritch. She and Baldwin make a sensational mother/son team that is so juicy, I get all giddy like a little girl about to dig into her Halloween candy. To place the cherry on top of the awesome chocolatey nugget, Steve Buschemi will be returning in another guest starring stint, and my thirty minutes of television provides enough happy cells to fight off the Swine Flu. Happy fists, I tell you. Happy fists of delight!

In tonight's show Liz calls out Tracy in front of the TGS crew, making him decide to act more professional, swearing off all the preferrential treatment lavished upon him since he makes more money than AIG. He challenges Liz, who also relishes the luxury of favored treatment, to swear off goodies herself and act like a regular schlub. I can only assume that there will be much sparks a flyin'. Jack's mom Colleen will be showing up to provide his quarterly meet up with a can of passive aggressive motherly whoop ass, reminding him of the day his father left. Jenna becomes mother to a pet monkey, completing Darwin's Theory of Evolution and the ways of Natural Selection by providing a primate for full effect. 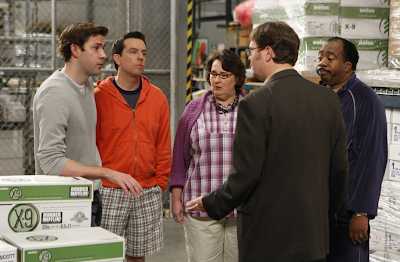 After two weeks of fabulous Office goodness, the show is brand new tonight with the return of Michael Scott to DM in an episode entitled (and illustrated above) "Casual Friday". The network synopsis says "Michael (Golden Globe winner Steve Carell) has to mediate a dispute within his new sales team. Meanwhile, trouble brews in the office when several employees take the term "casual" Fridays too loosely." "Loosely" might apply to boozy employee Meredith who, as the on air promo reveals, likes to go commando.

Although I still have qualms about how Michael and his band of merry salespeople were re-employed, and having to see Pam as a salesperson now, the show seems to be back on track as it works its way out to the season finale in two weeks. (Speaking of happy thoughts, there are hints that Holly will be back, and of course, my crush Rob Huebel will be returning to play her boyfriend and Michael's rival AJ - her boyfriend.) 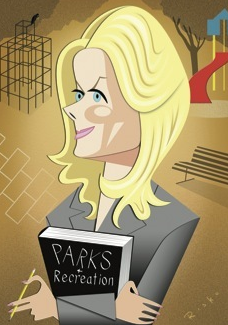 The New Yorker has a terrific article about Amy Poehler and Parks and Recreation. Poehler fans, like me, are rooting for the lady's success, but sadly, the show itself just isn't gaining any traction. Personally for this viewer, it is so much like The Office without the laughs, that I'm just not feeling it. I'm not a registered Nielsen person, but I'll continue to watch the last few episodes of the six that were ordered in support, hoping that something will stick to my funny bones. 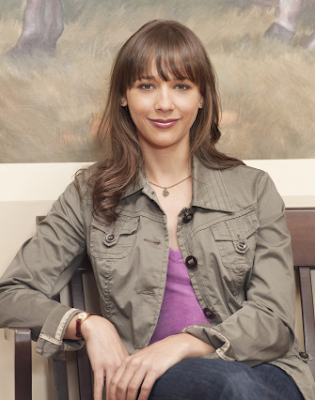 If anything, it's nice to see Rashida Jones, even though I keep thinking she's Karen Fillipelli. I got my hair cut like hers last week, and used the picture above to show my stylist. Bangs for Spring!

Email ThisBlogThis!Share to TwitterShare to FacebookShare to Pinterest
Labels: 30 Rock, The Office