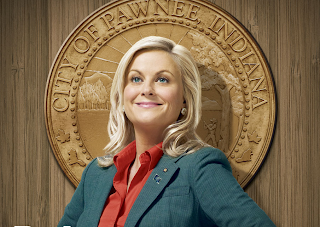 Thursday is upon us. Spring is raging. The last few episodes of the 2008-2009 season are beginning to play out on telly, accelerating story lines for the inevitable summer time cliff hangers.

However, one freshman show, Parks and Recreation, is still in the throes of its "how do you do" phase. I've stayed silent here about P&C because I'm not yet smitten with the new Amy Poehler comedy. The cast is terrific (Rashida Jones is sweet and Aziz Ansari is usually genius hilarious), but I have to fall into line with the others who say it's like a duplicate copy of the mothership show The Office. The single camera mockumentary formula on television only seems to work with The Office itself. Although the humor is derived from Leslie Knope's (Poehler's) ambitious, plucky and lack of self aware nature, the ongoing premise of trying to get an empty pit turned into a park doesn't conjure empathy or laughs for me. Yet, there was a scene last week where Ann (Jones) and Leslie walk in on the guys playing Guitar Hero that was quite chuckle worthy. So, I'm still holding out for the program to find its legs.

Tonight's episode is entitled "The Reporter". Leslie invites a reporter to interview her for a story on the park project, only to end up sending out the wrong message. When she calls Mark (Paul Schneider) to help save the story, he makes the situation worse. 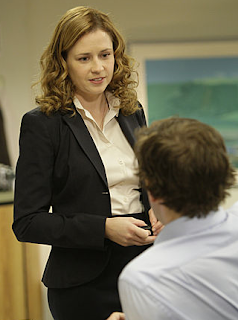 Speaking of The Mothership, The Office was pretty damn good last week. Solid, likable character interaction was infused with classic, funny, sublime writing, mixed with brillant performance. It made me a very happy Office fanatic and blogger.

The saga of the Michael Scott Paper Company continues tonight in an episode called "Broke". Michael and his crack staff (one who could easily be on Crack), have trouble making early morning deliveries. Meanwhile, everyone tries to get their expense reports in on time, while office tramp and hussy Angela Martin makes everyone follow Dunder Mifflin policy. I guess she has more incentive now that she's trying to impress and bed Charles Minor. Seriously, when will the Angela horniness end? Also, I'd like to see her deal with some repercussions from the Andy/Dwight triangle. If she has no remorse for her behavior, then I can't care about her. What about Jim and Pam? More of them...please. 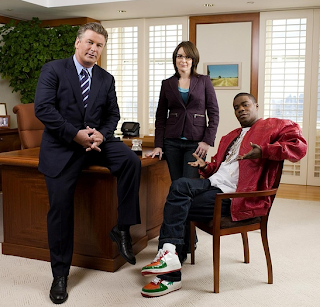 30 Rock is all new tonight with "The One". Since Selma Hayek has been all over this week's promos', it looks like Jack's paramour Elise is back from Puerto Rico. Jack is getting pretty serious about the pretty senorita nurse, and has Liz accompany him on a hunt for an engagment ring. Jack will also be turning to Tracy for marital advice, which should be a hoot. Elise tells Lemon she's hiding a secret (this scares me), and Jenna "loses her cool" (as the press release states) for an EMT when an injury on the TGS set summons the medics. 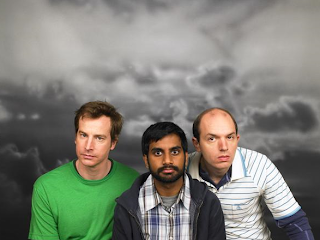 Each show noted above has a very close link to each cast member of the very sick, disgraceful and hard ass funny MTV comedy Human Giant. I love this show. It's a variety sketch series that most likely appeals to people with a hardcore warped sense of humor. The bits are incredibly clever, gross, cringe inducing and oh crap I can't believe I'm laughing at this hilarity. It's geared more for the male demographic, but hells, this lady likey.

Giant has completed two seasons on the music network with a third postponed due to other commitments by cast, who all have some connection with the shows listed yonder above. One of them being Aziz Ansari who is pretty booked right now playing Tommy Haverford on Parks and Recreation. He also played the fruit stand guy who hated Australians on Flight of the Conchords, and please...he was so cute and horrible, I fell.

He's also appeared in I Love You Man, a movie that is so much on my "must absolutely see or be a loser" list that, well, it's a must see. He's also been in TheWB.com web series Children's Hospital. This guy is so ubiquitous that you might find him sitting in the car next to you in traffic.

All attention must be paid to Adult Swim on the Cartoon Network at 1am Sunday Nights. The Mighty Boosh airs at this time, and it's WONDERFUL. The Boosh is Julian Barret and Noel Fielding. They have created a surreal, dreamy head trip of a comedy derived from years of stage performances and radio. I wrote about them a while ago. If you love Flight of the Conchords, Pee Wee and Spongebob, set your DVRs to funky, please. 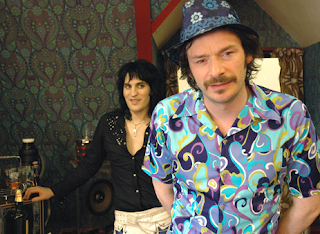 The Mighty Boosh airs on Cartoon Network's Adult Swim Sunday nights (or if you like, Monday mornings) at 1am et.
Posted by TVBlogster at 6:13 AM

Email ThisBlogThis!Share to TwitterShare to FacebookShare to Pinterest
Labels: 30 Rock, Human Giant, Parks and Recreation, The Mighty Boosh, The Office