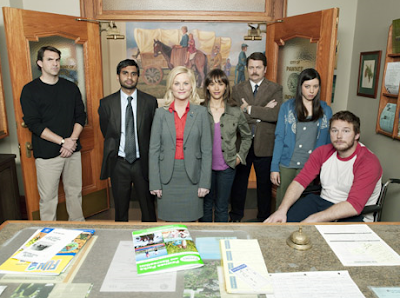 I worked at NBC so long ago, that all my former colleagues have either moved on to other careers, retired or died, leaving me without NBC press contacts who know me, rendering me useless in the preview screener pool. So, instead of being a blogger that can write a review of a yet-to -be-seen pilot, I'm a blogger who is in the same boat as the casual television blog reader. I can only go by what the media buzz is saying about the pilot episode of Amy Poehler's new show Parks and Recreation, which premieres on Thursday, NBC at 8:30pm. The word is - it's The Office, but with different characters. It's the same mockumentary, single camera, no laugh track, find the humor in the characters, not the words - kind of show. And it's brought to you by show runner Greg Daniels and producer/writer Mike Schur - the folks who bring you The Office.

I cheer on Amy Poehler, Rashida Jones and Aziz Ansari; yet, judging by the clips (below), it's a very familiar blueprint with a very talented cast that deserves better. Afterall, The Office formula is an acquired taste. What sustained it was the concept of The Everyman - the man and woman who go out each day and earn a living despite the drudgery. It showed how a lonely, selfish, childish boss can find a family beyond his desk, or how two young people can call in love despite the obstacles. Apparently Parks and Recreation doesn't have the Jim and Pam dynamic that molded the heart of The Office, which means there is a center that cannot hold. In fact, the original show itself is losing appeal due to the under developed storylines between the newly engaged future Halperts. Also Jim's own personal growth is evolving at a snail's pace while Pam's evolution from caterpillar to butterfly to uber queen bee dominates - and bores.

Nevertheless, I wish Parks and Recreation luck despite what I'm hearing. Perhaps NBC should muster more imagination than ordering up more programs from the same people who brought them critical acclaim on a show with low ratings. The Office's fans are devoted, and that dedication is due to character likability. If P&C doesn't make us fall in love with Pohler's Leslie Knope and her crew of government bureaucrats, as The Office did with Carell's Michael Scott, there may be a problem. Lightening very rarely strikes twice. Yet, I am forming an opinion without having seen the show - so I admit to being unfair here. I look forward to seeing the premiere.

Parks and Recreation premieres on Thursday on NBC at 8:30pm ET - sandwiched in between two new episodes of The Office. "Dream Team" airs at 8:00pm ET and "Michael Scott Paper Company" airs at 9:00pm ET, followed by a new episode of 30 Rock entitled "Cut Backs" at 9:30am ET.

Here's some press clippings on Parks and Recreation:

Email ThisBlogThis!Share to TwitterShare to FacebookShare to Pinterest
Labels: Parks and Recreation, The Office