Life on Mars Comes to An End 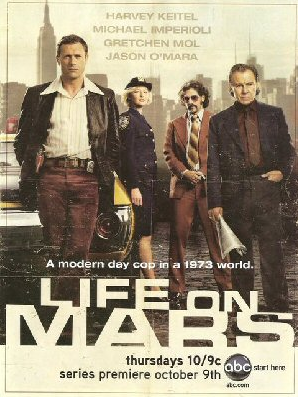 Life on Mars comes to its final conclusion tonight. We find out why Sam is in 1973, and whether or not he'll return to 2009. I'm going to miss seeing new episodes of this show. I've belly ached about the cancelation, but I have also come to terms with it. Perhaps American television should follow Britain's lead in television programming and allow episodic shows to end after a dozen or more episodes, allowing a story to begin, unfold and end without stretching the quality thin. Life on Mars will always be filed under the "Brilliant But Cancelled" category of television shows cataloged for all time. Although I have not seen every single episode of the original U.K. version, I do know it enough to proclaim that Jason O'Mara's portrayal of Sam Tyler felt more juicier than John Simm's. It pains me to admit it, but there is something to be said about sexy, and with that McQueen/Newman vibe, O'Mara tapped into that 70's plain clothed cop persona I loved as a kid. Not only did he capture the grit of the NYC detective on the beat, he could crumble with emotional intensity. One moment of tears filling his eyes out of fright, confusion, despair - and he could wrap your heart around his finger.

When ABC produced a less than an impressive pilot early last year, complete with a different cast (with the exception of O'Mara) they took it apart and started all over again with a new line up of noteworthy talent who stopped the show each week. Michael Imperioli was made for the role of the New York snarky detective Ray Carling. Jonathan Murphy was eye catching as the sweet young Chris Skelton. Gretchen Mol was a tough yet lovely Annie Cartwright, and Harvey Keitel was riveting as Gene Hunt. We won't see another great cast like this on television for a while. Long may they live on DVD.

Well, that was interesting. Fabulous episode, but what's with the ending? Sounds like they didn't write same conclusion as the original UK version. American Sam wasn't in a coma. He was on a mission to...Mars? 2008 never existed? Oh dear, I was hoping for the coma.
Posted by TVBlogster at 5:23 PM

Email ThisBlogThis!Share to TwitterShare to FacebookShare to Pinterest
Labels: Life on Mars