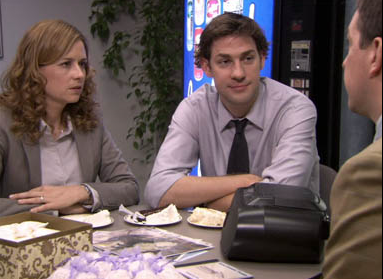 Just when I think I'm out, this show produces a wowser of an episode, so full of much needed laughs, so clever in character interaction, so rich in good plot movement, that I'm drawn back into the nooks and crannies of the comedy that is...The Office.

After my tirade of last week's double feature episodes, "Dream Team" and "Michael Scott Paper Company" which I liked, but feared would veer the ship off its course, last night's episode, "Heavy Competition" was joyful, from the first cheese ball toss until the final mouthful.

It was fabulous to see Dwight's loyalties to Michael re-ignited. The long sleeve dress shirt did it. Charles' new dress code dictates that Dwight ditch his mustard short sleeve number for a dressier long sleeve. Long sleeve shirts are like straight jackets to a Schrute, weakening him in case he needs to attack. Thriving under the chaos of Michael, he conducts clandestine meetings near dumpsters with his old boss, exchanging client and company information before he's ready to hop aboard the Michael Scott Paper Company express - that is - until Charles Minor endears Dwight with compliments on his focused wolf-like work ethic. Invites to drinks, a firm handshake, and Dwight's loyalty has just shifted to the new Charles in Charge. 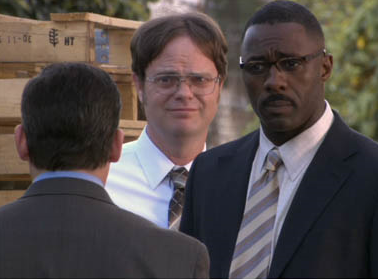 The war that ensues between Michael and Dwight gave us heaps of classic Office comedy. From the secret meeting that disclosed Charles knowledge of Michael's nosiness, to Dwight's lunch invite that turned into a ruse to cover a Schrute invasion of the MSPC office with intent to steal Michael's Rolodex, was pure sensational gold. When Dwight and Michael both vie to solidify their relationship with a prized client, to which a conference call and car chase by Dwight ensues, we see that no matter how savvy Dwight is in nature, he's no match for the sales expertise of Michael Gary Scott.

The script, credited to Ryan Koh, was superb. So much so, that I can't help but highlight some quotes:

One of the best bits of dialogue ever...

I must say, the blonde d-baggeness of Ryan is growing on me. Just for that exclamation alone. 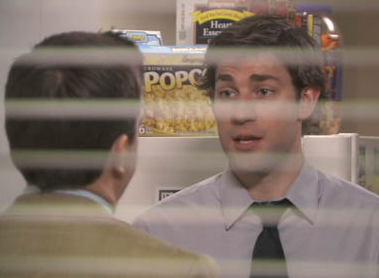 "Trust Me. You will not be walking, you'll be boogieing".

Thank GOD we got some Jim and Pam wedding planning - even if it was only a visit to Andy and Angela's "haunted graveyard of love". The idea of Pam "boogieing" down the aisle on her wedding day to Paul Simon's "You Can Call Me Al", along with an array of left over ideas from Andy's overzealous yet failed wedding plans, was so hilarious, it was pause button time, or else I knew I'd laugh over the next scene. There is no match for Andy's acapella group "Here Comes Treble", but when it comes to the Halpert wedding - ain't no way that's happening -even if the Nard Dog does sing the instrumental.

The professionalism of Krasinski and Fischer is mind blowing when scenes such as the one in the break room go down (see first photo above). Any actor who can get through that scene without snorting out a laugh or cracking a major smile deserves an Emmy for"Best Actor or Actress Who Held it Together During a Comedic Scene". Both John and Jenna, as well as Ed knocked it out of the park. However, the beauty of that moment was that it initiated closure for Andy. He's been suffering in a pool of bitterness he's happy to share with others. After Pam turned down Andy's busload of singing frat boys and a red velvet crucifix wedding cake as wedding options, he assumes Jim is in hell living under her thumb. Jim being Jim pranks the hell out of Andy by pretending to be needy all day, as the Nard Dog vows to be his emotional crutch, his "traveling pants". This was a prank done for a good deed, waking Andy up from his bitter funk.

When the jig's up, Jim he gives Andy a little lesson in heartache:

"Jim: Ok, two things I need you to understand: One, Pam and I are very happy together. And two, that stuff that happened with you and Angela is a bummer and I know you think you're never going to find someone else, but you will. I promise you. You will."

This episode had it all: well written comedic dialogue, good character continuity and likability, and a battle between friends that digs deeper than the rivalry right to the warm, soft core. More of this, please!

Next week's episode of The Office entitled "Broke" airs on NBC at 9:00pm et. Five more new episodes left, and the season is done.

Here's a highlight from last night's episode: (Oh great, thanks for the screenshot, NBC. There goes lunch.)