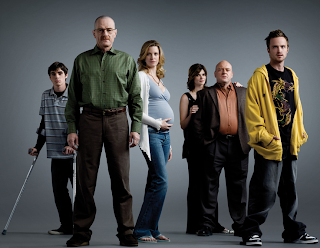 My Twitter partners are tweeting about King, The Amazing Race and other shows that fill the airwaves. It seems a waste when one of the greatest new dramas aired last night. Breaking Bad is mouth watering good. It's a rollercoast ride of tension and fear, mixed with humor and shock. It blows all other shows out of the water from Sunday night straight until the end of the week. Bryan Cranston is my new love. He stole my heart as the bumbling yet loving dad in Fox's Malcolm In The Middle. With all his delightful goofy historionics, I was bemused to hear of his new work on Breaking Bad. I knew the subject matter, and was confused how a talented comedic actor could tackle such a dark figure. Well, having won an Emmy and Golden Globe for his portrayal of Walter White proves that his versatility is limitless.

Cranston plays plays the aforementioned Walter White, a high school chemistry teacher with a loving pregnant wife and a special needs son. While taking on two jobs to make ends meet, he finds out he has terminal lung cancer. Broke and knowing he'll leaving nothing behind for his loved ones, he applies his knowledge of chemical recipes and decides to cook crystal meth. Not only does he cook it, but he produces it in its purest most highly sought after form. He joins forces with Jesse, a former deadhead student, who knows how to push it.

Throughout the first series, we saw how a brilliant scientist, who was part of a Nobel Prize winning team and could have reaped the rewards of fame took the road of less resistance. We see how his choices have lead him down this path - how a brilliant man whose one bad decision (among many in his life) brings him deeper and deeper into debt, uncertainty for his family's welfare, and ultimately - to the under belly of the drug world. In the second season, we see how the dark secret he's kept from his family it beginning to unravel. His brother-in-law Hank, happens to be a DEA agent, and is starting to get suspicious.

Last night's episode was a nail biting, sweat inducing ride. In case anyone is reading and hasn't seen the episode, I"ll stay mum, but needless to say, it closed one chapter and opened another, leaving a wide open page for Walter, Jesse and their families. No doubt it will be difficult and rocky to view. Yet, this is fly by the seat of your pants fascinating television. Breaking Bad is the new Sopranos in it's harsh story telling, in it's violence and the humanity that exists between the ugly cracks. Vince Gilligan, creator and writer of Breaking Bad has taken his place alongside David Chase as a spinner of intense drama that leaves you queasy yet satisfied and clamoring for more.

Breaking Bad airs on Sunday Nights on AMC at 10:00pm. (With repeats airings throughout the week. Check your listings).
Posted by TVBlogster at 5:51 AM

Hear! Hear!
So glad it got a second season. I look forward, yet dread watching each episode.