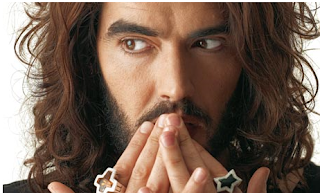 Russell Brand is a household name in Britain; however, here in the U.S. he is a curiosity. An edgy comedian with a Goth visage - he's all eye pencil, long tresses of Lord Bryon hair, tight jeans and boots, harboring a sex drive that could recharge a dead car battery, and a way with words that could slap you down in one cutting hilarious sentence. He's also known as the guy who insulted the music establishment when he hosted last year's VMA's, a choice by VH1 that was odd, if not daring. It turned out to be a disaster when Brand called Bush mentally challenged, pleaded with America to vote Obama as a member of The World, and then dissed The Jonas Brothers and all teen virgins who wear promise rings. Previous to this, Brand had only been spotted playing rocker Aldous Snow in Judd Apatow's film Forgetting Sarah Marshall, and had been slightly known only as a comedian famous in Blighty. Now, he's known for stirring the pot, and for those who love him, calling out some self righteous over exposed selves.

With this amount of controversy attached to his name, Russell Brand Live in New York City aired on Comedy Central last night with a splash of vinegar, delicious revenge on haters, stories of hitting on actresses and sexual exploits that could raise the hair of any virgin promise ring wearing Jonas fan. Taped in New York's Museo del Barrio, he stomped the stage with foppish dramatic flair, like a modern day aesthete or funky pirate (take your pick), read aloud emails from people he offended, retaliated with blasting verbal zingers that hit harder than any physical blow. Brand went on to joke about his inability to learn how to surf, and his fear of riding a horse while on the set of "Sarah Marshall". He also ranted incredulously about the time he tried to chat up co-star Mila Kunis, only to find out that her boyfriend "Mac" was really Macaulay Culkin. It was all cathartic, funny and real.

There were some "blue" moments, such as his discussion on three-ways and exchange of bodily fluids that may be a little hard to take for the squeamish; yet, Brand's performance was refreshing, fun and left me wanting more. Perhaps HBO will give him a stand up special, where he can really let loose with some gritty stories, especially about his sex addiction and past drug use, as well as his recent battle with the BBC over a controversial voicemail he left on an actress's phone while hosting a radio show with local talkie Jonathan Ross.

You either love Russell or hate him. I'm on the love side of this fence. He's hilariously honest, blazingly funny and dead sexy. I can't wait to see more from him.

And a loving Hare Krishna to you too, Russ.