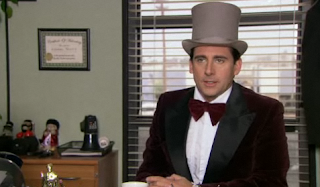 The movie Willy Wonka on the Chocolate Factory always creeped me out as a child. I remember seeing it during its first run in the cinema and was enthralled yet frightened of this oddly serene man with the top hat played by the strange Gene Wilder. It wasn't until I was old enough to understand the concept of dark comedy and Roald Dahl's message that I was able to sit back and enjoy the fake candy trees and the plastic looking edible grass. However, those Ompa Loompas will always give me the shivers. Strange little fellows.

That is why last night's episode of The Office, entitled "Golden Ticket" felt like an oddball, strangely exotic blend of realities, where Michael's shenanigans are finally starting to hit the fan. With Dunder Mifflin reeling to stay afloat in this current harsh economic climate, his errors and unprofessional approach, although garnering results, may be building up into a house of cards ready to crash and scatter in the weeks to come. He's already showing signs of unhappiness with corporate, his behavior is fraying CFO David Wallace's nerves, and with the push of his ill advised Willy Wonka scheme, he's fulfilling Stanley's belief (and others) that the boss is definitely a complete idiot. Add pushing Dwight to take the hit and pretend he had the bad idea is rough enough, but to try and take away the credit when the client gave Dunder Mifflin 100% of their business just adds another card to that flimsy tower. It was stupid of Dwight to agree to fall on the sword, but I'm glad he took the credit when the Golden Ticket scheme suddenly worked.

Great jokes. Loved the cold open with the knock knock and ding dong jokes. The tag completed it like a lovely bookened.

Having Kevin get advice from the love embattled (and embittered) Andy was hilarious. Getting advice from the "hot" and "perfect couple" Jim and Pam was a hoot as well. One thing - Pam has only dated Roy, Jim and the cartoon guy from season three, so I'm not sure what kind of experience she is drawing from - but this new improved Pam - the girl who always needs to be loved and has to be right - so whatever.

The Office will air a brand new episode next week at 9:00pm EST on NBC. It's entitled "New Boss". Idris Elba stars as the new hard ass VP who might put Michael's future into a tailspin. Sneak peaks on the episode have shown he's not going to take Michael's interruptions during meetings, nor will he take much of his silliness. (The following week is entitled "Two Weeks" - hinting that Michael may be submitting his notice). Seeing someone actually hand Michael's head to him on a platter will be fun...and I'm sure a little heart breaking too. After all, he's a silly, cowardly man - but his heart is in the right place.

Posted by TVBlogster at 7:49 AM