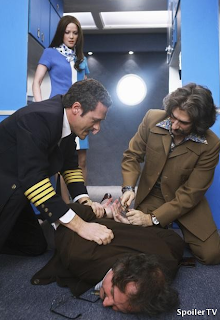 Life on Mars may have been canceled, but in last night's episode "Annie, Tea or Me", one of the remaining episodes to air until the conclusion of the storyline, we witnessed a prime example of why the inevitable end is such a disappointment. It was a fabulous 70's romp, filled with strange swingers, flush with all the glamor of air hostesses flirting with handsome moustacheoed pilots. It mixed in the strength of Annie's character, and her burgeoning, realistic love for Sam. We also get more of an idea that Sam is quite smitten with the cute Annie himself.

Being an ambitious female cop in a precinct filled with Archie Bunkers of all ages, shapes and sizes is not easy - especially for "No Nuts - Donuts" Annie. She's been breaking leads in many a case now - one being the recent caper with the Weather Underground. Now, she's filling in for a dead flight attendant, found in garbage pile, who has a very striking resemblence to Annie. So striking - she's a dead ringer for our favorite female cop. Using this coincidence to her benefit, she leads the undercover investigation by donning a wig, rocking a stewardess uniform and boarding a plane to crack the case. Shadowing her is a very dashing Sam, also incognito, dressed as a pilot with stripes and a porn mustache only Jason O'Mara could pull off. The low key Gene and Ray are pretend passagers, hanging back to protect their partner, setting their sights to nab a known pervert who may lead them in the direction of the murderer. They ultimately arrest the pervy guy in-flight, and the case does indeed begin to unravel, leading them to a key swapping party with swingers, eventually nailing the case thanks to Annie's bravery and tenacity. Sam's protective yet liberated views of her ambitions were touching. Quotations of David Cassidy songs aside, you can see she's getting a little soft for the handsome spaceman detective from the land of 2008. It was also nice to see cameos by Gina Gershon and Mark Lin Baker.

I loved seeing a depiction of what female police officers must have gone through during that era. Although a show such as Police Woman was hitting the airwaves at the time, and woman's liberation was undergoing a cultural explosion, some male dominated areas of expertise were still in the dark ages. Unless you filled the role of parking meter maid, women in law enforcement had a very steep uphill climb. Annie was a pioneer, and last night's show championed this element to perfection.

Thanks to the magic of YouTube, I am finally catching up on the original UK series. Better late than never.
Posted by TVBlogster at 7:37 AM

Email ThisBlogThis!Share to TwitterShare to FacebookShare to Pinterest
Labels: "Brilliant But Canceled", Life on Mars