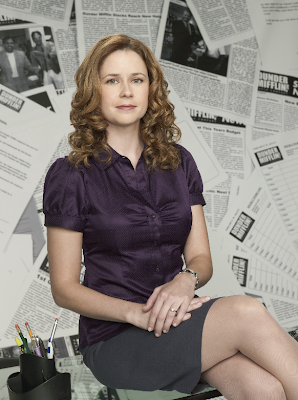 So after several years of being behind a receptionist desk in the sales office of a failing paper supply company, Pam takes a stand in solidarity with Michael and up and leaves...to become a salesperson at his imaginary company with no business model. It's an inspiring story of a deposed regional manager who is fulfilling a dream he's had since...before lunch that day. Yes, this is Pam's emancipation. She's leaving the receptionist desk behind to begin anew. With Michael. The Michael Scott who doesn't have a plan. The Michael Scott who thought Cirque de Soleil should have been paid employees for his party. The Michael Scott who doesn't want to be an escape goat.

So, all those years watching a sales staff while bringing home a paycheck didn't make Pam want to work her way into the position. She wanted to be an artist, so she took some classes. She wanted to check out graphic design, so she went to art school in NYC, separated herself from Jim, and flunked out - only to realize she hated graphic design. Now, after doing nothing about a sales career, she spends one day wrestling with a copier, and a suddenly she can't take it no more. A desperate plea from Michael, crawling on the floor in all his undignified glory, and she does a Jerry Maguire and leaves with him - under the condition that she's not a receptionist, but a sales person. She runs past Jim as he tries to slow her down to think it over, and Jim is suddenly all hunky dory and proud. I hope he can supplement those mortgage payments with love, because by the looks of the promo for next time, Michael seems to be taking meetings in his pajamas. Good luck, Fancy pants Pam.

Why did this have to turn in to the 'Pam Is All Fancy, Let's Focus on Pam's New Confidence' Show? We get it. She's gained her confidence. Maybe they want to show how Beesly's new gumption can make her impulsive? Nah. That would make sense. After all, this is Pam's show. We have to love her, right? When are we going to see some Jim evolution? When are we going to see her support Jim and not make silly digs about how it took him forty minutes to get into his tuxedo they day he punked Dwight. He looked pretty embarrassed. Her chuckling over his stupdity was adorable. (She could have suggested he bring an extra suit to work - she knows better). Or how about making fun of his dainty bowling fingers? Or talking about how he rewired her TiVo and she didn't get audio for a week? Wow, Pam. That passive aggressive cuteness isn't a fanciness I had hoped for you. And please, I'm not a hater, just a fan who is confused.

Michael needs help. Andy is adorable. Charles is an ego maniac. I can see why he's only there for six episodes. Giving Stanley the duty of productivity manager, and Kevin the receptionist job - good instincts there, chief. Yeah, he's not long for this Dunder world.