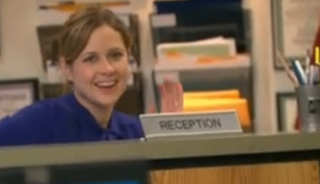 After what seems like the longest stretch of reruns since the summer hiatus, a brand new Office is finally....finally upon us tonight. Behold the new episode,"Blood Drive". It's Valentine's Day! (Yes it is March 5th...just go with it since NBC doesn't seem to think so). Jim and Pam are banished for too much PDA (Public Displays of Affection - for my dad who may be reading this) in the office. They end up having lunch with Bob and Phyllis. What will they say to the young couple in love? I shutter to think...

I also wonder what too much PDA would be for Jim and Pam? Jim looking longingly at Miss Beesly from his desk? Miss Beesly blowing a little kiss from reception?

Come on future Mr. and Mrs. Halpert! If major snogging is allowed on prime time, why not give the people what they want and rent out the supply closet for an afternoon romp? Now that's what I call PDA. 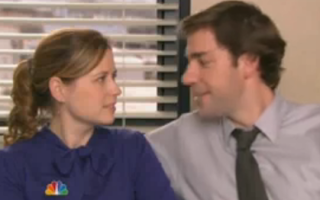 Also on the show: There is a blood drive going on. People give blood. Michael is there. Dwight's weird and very annoying. Angela's a humorless cat lady, and I don't care about the rest of this episode synopsis because I only care about Jim and Pam since I haven't seen any interaction between them for ages.

30 Rock is spanking new too! 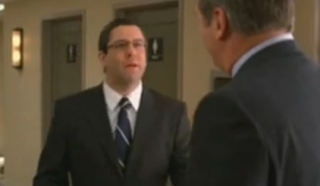 30 Rock is all new tonight with an episode entitled "Goodbye, My Friend". Liz befriends a lady who works in a doughnut shop and tries to adopt her kid. Jenna is freaking out over her birthday, and Frank tries to be more like Jack after bonding during an evening of hanging out. Now, this part is very odd. It took me several viewings of the promo (the screen shot is above) to figure out who the pony tailed man in the suit could possibly be. At first, I thought it was Steve, the guy I used to have a crush on when I worked at NBC back in the 80's. But no, it's a clean shaven Frank. Looks like Judah Friedlander had to shave down for this one.


A moment to ponder last night's Life on Mars... 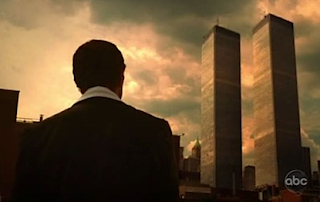 Oh, how I will miss this show. This photo above is a shot from the scene that hooked me to Jason O'Mara's encarnation of Sam Tyler, originally created in the BBC series of the same name. This was the moment in the first episode where Sam knew he wasn't in Kansas anymore. In fact, he wasn't in 2008, nor in the same century. He was in 1973. The towers marked it. This moment hit me in the gut.

With Elton John's "Rocket Man" fueling up the episode "Revenge of Broken Jaw", last night's installment saw Sam continuing the struggle to deal with his new home - the land of NYC 1973. It's easy to feel heartbroken for the man. Whether this is a coma dream or an actual travel through time, we will have to wait and see. However, Sam is consulting with an actual therapist, as hope in returning to the 21st century, and the land of the iPhone, is growing dim. The strange twist is - could he be falling in love with the pretty lady cop Annie? Will he begin to want to stay in the past to be with her?

This was a great episode, with a terrific blend of historical nods (albeit incorrect in terms of radical groups and terrorist back then - for the Weatherman apparently never killed anyone but themselves - accidentally.) Sam is falling for Annie, and she remains amused by his confusion over his whereabouts - seeing him as the Spaceman trying to adjust to what he feels is not really his home.

Perhaps this show should only have one season. After all, the original BBC series had roughly sixteen episodes that stretched over two series. Completing the US Life on Mars in about twenty installments with a satisfying conclusion at season's end might be the right thing to do, rather than stretch it out beyond a point where plot credibility is diluted.

Still, I'll miss Jason O'Mara and Michael Imperioli. Despite all the UK die hards who naysayed their way throught his (if they even got this far), this was a wonderful cast and fine production.
Posted by TVBlogster at 12:29 PM

Email ThisBlogThis!Share to TwitterShare to FacebookShare to Pinterest
Labels: 30 Rock, Life on Mars, The Office