Flight of the Conchords: "It's a Rags to Rags Story" 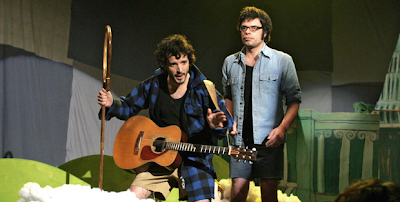 Where to begin when we've reached the end? "Evicted", last night's season finale of Flight of the Conchords could be the final new episode ever, and probably one of the funniest.

Jemaine and Bret get thrown out by Eugene the landlord for paying rent in New Zealand currency - not US dollars - since the day they moved in. Several thousands dollars behind in back rent, they are turned out on the street, only to be rescued by Doug and Mel, whose marriage is now on shakey ground. Murray comes up with a plan to get the boys on their feet by staging an off Broadway production of their lives to bring in the dough. The problem is, Murray invited members of the consulate, who realize through the dramatics of the play, the guys are illegal aliens. They are deported back home where they resume tending sheep like the shepherds they were before they hit the big city.

Taiki Waititi, long time guest collaborator directed this one to perfection with nice shots of the boys waking up in the morning, tapping on tables, countertops, radiators and pigeons in an orchestra of daily sounds. The musical number "Petrov"is a well known to FoTC fanatics who've savored their live performances. The video was set in a beautiful, dreamy ocean with blue fabric rippling like waves as Doug and Mel played along as the singing cannibals lost at sea, who keep eating bits of Petrov (Bret) whenever he falls asleep.

Murray's play about the Conchords and their daily struggles depicted the day Bret got his head stuck in a chair, the week Jemaine sold his body, and their arrival in the USA with Dave as the Statue of Liberty, all culminating in a number with multiple bewigged red heads in suits doing what can only be surmised as the dance of the Murrays.

The lads from the "other" down under are utterly nonplus regarding their circumstance however dire it may have been. Yes, they struggled and wanted success badly, but through the bumbling ways of Murray's management, and their low resistant way of approaching opportunity, they stayed unknown and poor. As they stated in their daily meeting with Murray, "It's a rags to rags story." As bittersweet and funny as this sounds, it's precisely what Flight of the Conchords has been for the past two seasons. And what better way to find laughs and great songs by witnessing two lovable losers who have no ego, who just make music, and who just want to pick up some chicks?

Although their lower east side hipster look allowed the boys to melt into the New York scene physically, they always had a fish out of water vibe to them. New Zealand had always been firmly planted in their hearts, and their hearts were always metaphorically stitched on their sleeves. With Murray helping them like an uncle, taking mindless roll calls, taking care of their business in the New Zealand consulate, they created their own home away from home, a small hapless family that held a little slice of their far away land in the big U.S. of A. Seeing the boys back home tending to their sheep was like seeing two lovable seals who lost their way set free in their own familiar ocean. They may have returned losers, but looked like they truly belonged.

HBO has not yet ordered a season three of Flight of the Conchords, and the guys themselves want to move on and do other things. In fact, this finale had a real final feel since it brought them back home. If this is indeed the very last new Conchords series, I'll say a big fat thanks for the laughs and the music. We'll always have the DVDs to remember you by. And speaking of DVDs, knowing season one's package was rushed due to holiday deadlines, James Bobin mentioned they were going to make up for lack of content by releaseing season two's DVD's chock full of deleted scenes, bloopers and special features. Also, they are hitting the road for a concert tour of the US in April. This blogger has a ticket for Radio City Music Hall April 14th! Their show may be on hold for now, but they do live on. 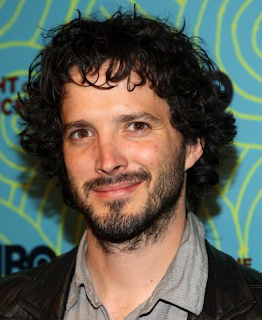 Congratulations to Bret McKenzie, who married his long time girlfriend Hannah Clarke this past week. They are expecting a child soon. Source: Stuff.co.nz. He joins Jemaine in wedded bliss and Daddy-dom.


Over at WhatTheFolk.net, Sherry sent out some questions to James Bobin, who returned with an interesting discussion on the making of the show.
Posted by TVBlogster at 6:43 AM

Flight of the Conchords is not entirely what this site is about. If you want all the info on the guys - go to www.whatthefolk.net. I provide links to that site in most of my entries about FoTC.