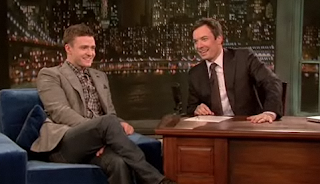 Late Night with Jimmy Fallon debuted last night with guests Robert DeNiro, Justin Timberlake and Van Morrison. Heavy hitters for a maiden episode made it feel as if Jimmy may have reached far above his head. The monologue was rather stiff, with cue card reading more obvious than on any random SNL sketch, but given that he was rightfully nervous, I'd give him some time to ease into this aspect of the talk show. Personally, I wouldn't be upset if the opening jokes were dropped. The only person who could give good monologue was Johnny Carson. Second best is David Letterman - when he's dishing out three jokes for one monologue per show. I get bored easily.

DeNiro was definitely a good sport in joining Jimmy for the first show, being this low key self, and playing along with a sketch called "Space Train", which was more amusing than hilarious.

The Slow Jam News showcased Fallon's new house band The Roots, singing the headlines of the day, Flight of the Conchords style, with jazzy, sexy smoothness. This band is tight, funky and nasty - a nice departure from Max Weinberg's Seven - and those guys were good.


Justin Timberlake was a perfect guest for Jimmy's first show. They already have a solid comedy history together, having done SNL's famous Barry Gibb Show, singing in the Bee Gee Falsetto with remarkable accuracy. Timberlake is always a great talent to see. He could do a muffler commercial, and I'd be happy.

I know there are naysayers, but I think that Fallon should be given a chance. Last night's debut was decent, if a bit shaky; yet, the guy is only human and wants to succeed in bringing the funny to late night television. Yes, he has large shoes to fill, but so did Conan. Time will tell if Jimmy can live up to the expectations of those who had faith in giving him this gig. I'm happy to give him that chance.

Life on Mars - Canceled by ABC 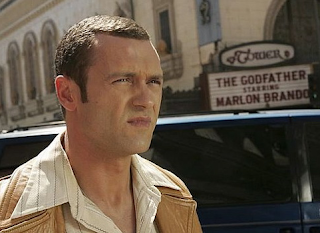 It's not like this is unexpected, but it's disappointing nonetheless. Life on Mars was officially canceled by the ABC network. It joins Pushing Daisies, Eli Stone and Dirty Sexy Money into the dustbin of broken ABC network dreams. Could it be that ABC is ditching drama, possibly for the low cost hack of reality shows?

The good news is production will continue to play out the storyline in order to reveal the mystery of Sam Tyler. The bad news is we will not continue to view this fabulous 70's police style drama beyond the conclusion, which could have resulted in episodes that touch upon the original UK sequel Ashes to Ashes, currently airing on BBC America. No more Jason O'Mara's wonderful Paul Newman/Steve McQueen vibe, that retro, yellowish feel of the past, the TV cop funkadelic music, the intensity of Michael Imperioli, the sparkle of Harvey Keitel. Goodbye to all that.
Unfortunately, another great British television show has been ruined at the hands of American programming development, an entity that has a need to pound out more episodes than necessary. Oh, and there was that two month hiatus, after a very solid Fall season, which interrupted the story flow and viewer interest.

It's also sad to see yet another New York production fall to the ratings. Mars joins NBC's Lipstick Jungle as the second NYC production to be officially axed within the past week.
Posted by TVBlogster at 10:54 AM

thats too bad. that show looked like it had some potential behind. oh well, i guess ill stick to 24 :)
-jack