The Office: Whither Michael? Whither Dunder Mifflin? 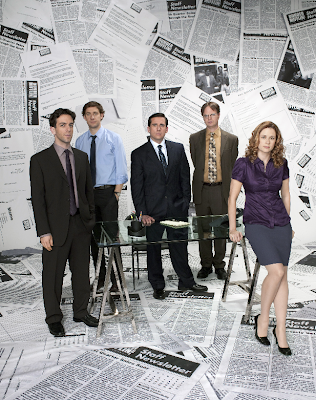 Will last week's resignation of Michael Scott prompt him to start Shoe-La-La, his fancy shoe store for men? Or will he strike out on his own by selling his own brand of paper? We all know how high Michael can fly, but the problem is, he tends to flap his wings in the wrong direction. He's more chicken than eagle, one who can't really soar with the eagle's nest, as he was once known to say. In tonight's episode, "Two Weeks", we'll see where the chips lay after Michael's revolt. Charles Minor has certainly shaken up the very insular Scranton branch. Not only was Michael rattled, Jim's tail is also on the line.

Michael's behavior has been frustrating lately. Party planning, Willy Wonka themed discounts and placing blame for all failings on lackey Dwight have killed my empathy for the DM Regional Manager. Yet, it makes sense in the context of the whole story. DM Scranton is in their own little universe. They are tucked away in an industrial town in Pennsylvania, in a featureless corporate park, working in one of the most mundane, unglamorous of jobs without the big guys around to watch them every minute of the day. When senior management like Jan, Ryan and now David Wallace try to assert some semblance of management, they're ineffectual in bringing the hammer down on Michael's unprofessional bull. So, for me, even though I've lost sympathy for Michael, I find his actions very interesting - almost one part of a whole sum. It's not just about Jim and Pam, Michael and David - it's the fact the whole company is swirling out of the control with bad management that has allowed Michael's behavior to fester.

If this were a healthy company, Dwight would have been fired and jailed for setting fire to the office and jamming all the doors shut as he did in "Stress Relief". He had a lot of nerve smirking in triumph to the camera last week when Jim was being watched by Charles through the window. Dwight has done a lot worse. He sets up an environment of disturbia by storing weaponry around the office. His childish super hero/sci-fi/horror fantasies and need to be the authoritarian lead to the Hannibal Lector impression during the staff CPR training. Sending out memos with rules he has no authority to enforce is another annoyance. Abandoning Phyllis out in the middle of a bad neighborhood to walk home in order to lose a few pounds was evil. What bothers me is that as much as I like to see Charles making Jim squirm (it's going to be character building), he'll be so busy breathing down Halpert's neck, he will overlook the history of Dwight's antics. But then again, Holly got called out by HR for doing her job questioning Meredith's sexual favors for discounts. The company doesn't seem to care how it gets its money - even if the women prostitute themselves to clients. So, basically, the corporate culture of Dunder Mifflin sucks.

And this is the whole point of the show. Dunder Mifflin is crumbling from within. If it were an upstanding company, Michael would have been fired a looong time ago, Dwight would be in prison and basically - you wouldn't have a show. The fact that DM chose to keep and coddle Michael, allowing his babyish behavior is the hook that allows The Office its creative license. Their foibles are exaggerated symbols the wrongs of corporate America. And as the news can attest - there is plenty amiss out there.

This season has been starkly uneven. Not much to get passionate about. Greg Daniels and Mike Schur's absence has been felt by the lack of continuity and some wandering story lines. Perhaps I'm just gullible, but I still trust the writers are leading up to something. It's a situation where you have to wait for the stories to unfold, stand back later and see the bigger picture. Will Jim be bumped to Regional Manager? Will Michael land on his feet? Look for some future shake ups. There might be a change at the reception desk. Charles might give Jim and Pam an ultimatum about couples working together. Pam could be out of a job.

As far as the addition of Charles Minor goes: I think this show just got a lot more interesting.

Movie Posters are Fun!
I love this. (Click picture to enlarge) 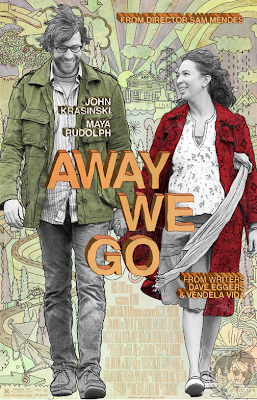 Posted by TVBlogster at 8:24 AM

Email ThisBlogThis!Share to TwitterShare to FacebookShare to Pinterest
Labels: Away We Go, The Office