Flight of the Conchords Find "Cool" in a Jar 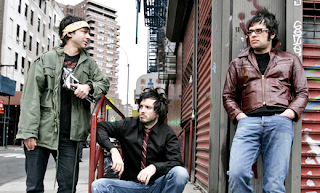 It all starts with a single dollop of gloop applied liberally over the hair and styled to perfection. Then, the ladies come to your gigs, people want to know you, and sitting on the street corner with the right amount of slick to your locks make you totally, rocking hot.

So goes down-on-their-luck Bret and Jemaine. One night they are playing to an empty room, the next day, a jar of hair jell introduced to them by Murray makes them significant. The only problem is - what happens when there is no jell left? This is a story of addiction as per The Conchords - those sweet guys who remain clueless about self esteem and the ways of success.

Also, the Prime Minister of New Zealand remains in NYC with Murray and the Consulate crew, this time with a councilwoman from back home, played by Lucy Lawless, for whom the PM seems to have a very sweet crush. While in New York, he's decided to initiate a new section of Manhattan devoted to the New Zealand community. You know Chinatown and Little Italy? Say hello to "New Zealandtown" - a strip of street that is approximately less than half a block long filled with ex-patriots (namely, Bret, Jemaine and two guys who are of Maori heritage) who've started their own cultural explosion. A bus tour is as long as half a minute, with shifting in reverse for a few feet an added treat.

Meanwhile, The Conchords are under lock down in their apartment, scared to show the world their uncool, un-moused hair, angrily throwing an empty tub of hair product at each other. When Murray fails to show up with replenishment, Bret and Jemaine live in their pajamas and under covers for about a week until he gets them to come out and perform at the NZ street fair despite the lack of cool hair. Sadly, no one is interested in the goopless guys on guitar, but they live another day.

This was another funny, satisfying episode filled with all the hangdog humor and laughs as usual. "Fashion is Danger" is the key song of the episode, giving new wave music a go with Depeche Mode/Human League flair while their hair goes all Flock of Seagulls thanks to well - hair goop.

Only two more episodes left!
Posted by TVBlogster at 10:33 AM