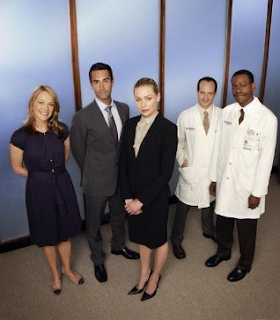 ABC is bringing some fresh comedy to the table after a long fast of nothingness. Yes, they are now airing the last season of Scrubs, which was kick dropped off the NBC network, landing in ABC's backyard; however, originally produced laughers have not been plenty on the alphabet channel. Here's a start. Fresh from the ABC development world to you, Better Off Ted premieres tonight at 8:30pm EST, and it looks promising. It takes place in a development lab where the corporate structure is unforgivable and no nonsense. Michael Scott and the folks from Dunder Mifflin probably wouldn't surive long here. Much like The Office, it stars some pretty under-the-radar talent, with the most notorious being Portia de Rossi, who starred in the extremely funny, ground breaking and mournfully missed Arrested Development.

I'm not one of the lucky bloggers to get preview screeners, so I don't know any more than is in this NYTimes article, written by Alessandra Stanley, someone who undoubtedly received a sneak peak video and can fill us all in.

Here are some clips. Funny stuff. Kind of a cross between 30 Rock and Arrested Development (and yes...The Office).

Better Off Ted airs on ABC TONIGHT 8:30am EST after Scrubs.
Posted by TVBlogster at 10:14 AM

Email ThisBlogThis!Share to TwitterShare to FacebookShare to Pinterest
Labels: Better Off Ted