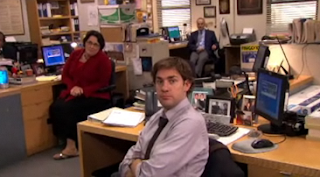 It was a low key night for Dunder Mifflin; however, it wasn't so diminished as to have been off the radar, nor so incredible to be off the charts. Instead, it was a nice reunion with the Dunder Mifflin-ites after weeks of repeats. There were some laughs, some heartwarming moments, and some icky situations that make The Office was it is - a funny, warm, momentarily icky show.

The cold open was pitch perfect. It never occurred to me that Pam's job could be easily replaced by a new fangled high tech phone system. However, it's occurred to her, since a wandering telephone sales guy keeps coming by to show his wares to Michael, only to have Pam tell him he's not in time and time again. Jim steps up to bat by pretending he's Michael, only to have to cover with shouts of "Heeeeeyyyy!!!" when the real Michael comes out and offers help. Michael loves silly gestures like a cat loves a shiny ball. They "Heeeeyyyy" each other until the sales guy runs away. Mission accomplished.

On to Blood Drive. Yikes. There's a blood mobile and giant needles and bandaids everywhere. Dwight has trained his veins to enlarge and his penis to retract. Lord - just one of those above mentioned "icky moments".

Pam finally got her Valentines flowers! That's because she's now engaged to a guy who, you know -- actually loves her and the ground she walks on. Michael, Dwight and Kevin - all alone on "V" day get pissed at Jim and Pam's Jamminess, so they exclude them from any reindeer games (or should I say "cupid games?") Phyllis swoops in and asks them to join her and hubby Bob Vance of Vance Refrigeration for lunch. Since Michael is scared of Bob, it wouldn't be a problem to take the entire afternoon off. It took some twisting of Jim's arm to get him to go. After all, "those mines can't sweep themselves." Oh Jim. Marry me. Ok you're marrying Pam, but I'd take your hand in marriage and play MindSweep with you forever in my head. Paul Rudd, my imaginary husband, won't mind.

Michael runs into a pretty and funny lady in the blood mobile, giving up her hemoglobin, but not without major nerves, causing her to talk incessantly and joke with him. Congratulations to Michael. He actually treats her well, makes sweet comments, and looks like a man who has genuinely learned his lessons through his relationship with Holly. (However, I kept thinking..."NO! Holly is your girlfriend, not her! Just wait - they'll write her back in for you. Give it until the season finale.") Due to lack of food and blood, Michael passes out and wakes up again, only to find that his fairy princess has departed, but not without having left her pink glove behind. In order to find her, he plans a Lonely Hearts party where every single in the hood is invited to mingle with his lonely hearted sales staff. Flyers promote the shindig - with a little note about the pink glove - hoping it will catch the eye of the talkative, nervous blood giving lady.

The party isn't exactly swinging, but it brought in good results. Kevin hooked up with a charming lady. Dwight saw a little blondie and hit on her by trying to sell her paper - only to scare her away. Michael, constantly looking at the door for his lost princess, is left alone. The sweetness is in this staff. They don't normally show him affection; yet,they kept him company while waiting for the lady who is out one pink glove. They wait until it gets too late. Sadly, his princess never showed up.

Pam and Jim have missed all this. They've been dining with the Vances, who have disappeared to have sex in the handicap bathroom. That's the other icky part. The post coital, flushed faces upon their return - Phyllis furiously drinking water. Oh Lord...Jim and Pam's face said it all.

Nice episode. Nothing spectacular. It felt like a transitional episode that will link to some heavy storyline involving Michael's future at Dunder Mifflin. However, it was gratifying to see how he's evolved emotionally with women, leaving the crazy and dysfunctional Jan Levinson behind.

I'm still waiting to see some Jim and Pam PDA.

The next episode "Golden Ticket" will air Thursday,March 12th at 9:00pm EST.
Posted by TVBlogster at 6:29 AM

haha, such a good show. im sad i missed that episode but at least i got to see the hi-lites. thanks.
-Jack @ Custom TV Commercial