Flight of the Conchords: Season Three? 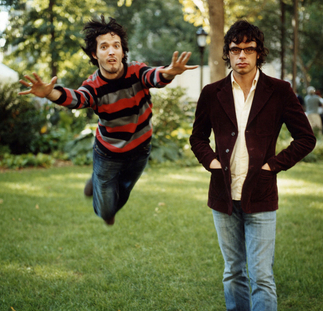 Brett and Jemaine have wrapped up a second season of Flight of the Conchords on HBO with a final episode that had them deported back to their beautiful land of New Zealand, frolicking with Murray on the farm, running with sheep and playing music with nature. You would think that would be the end; however, there may be hope for another series, or perhaps a special. An article in Broadcast Now provides that glimmer.

The guys are gearing up for a tour of the U.S. this coming month, so perhaps the dust will settle on what their next step in the television world will be. Since the show was a tiring undertaking for McKenzie and Clement, I'd be happy to see them continue their relationship with HBO through concert specials, and perhaps...a movie? Wishful thinking on my part; however, this doesn't have to be end of the lads as we know them.

Thanks to Sherry at www.whatthefolk.net for originally posting the article.
Posted by TVBlogster at 6:26 AM