Stewart and Cramer Face Off 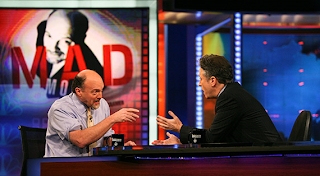 With all the hullabaloo between Jim Cramer and Jon Stewart coming to a head on Thursday night, wouldn't you know it? I fell asleep. From what I did see in my wakeful state was Jim getting railed by Jon, who had plenty of video ammunition to prove that CNBC and all it's whiney hosts have nothing on the Daily Show Staff.

Word is - they ran long in the taping yesterday evening. Comedy Central has the uncut version. Here's part one. To see the rest, click to Comedy Central's video site: