The Mighty Boosh on Adult Swim 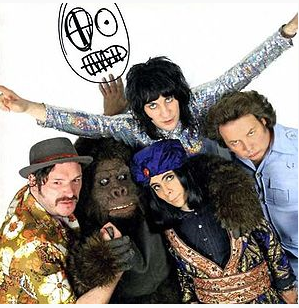 Take Pee Wee's Playhouse, Spongebob Squarepants, throw in some Flight of the Conchords musical buddy vibes, take a tab of LSD, put up a 70's David Bowie poster, and you're close to experiencing one of the trippiest, funniest television shows to come out of Great Britain in a long while. The Mighty Boosh started airing on Cartoon Network's Adult Swim line up on Sunday, March 29th at 1am, and not a moment too soon.

The Boosh (as it's also known) stars comedians Julian Barrett and Noel Fielding who created the show back in the late 90's. Over the years, it snowballed into a radio show and finally a television series on BBC3. The series features their creations Vince Moon and Howard Noir, two friends with very different styles and temperaments. Vince is Fielding's character, a beatific, ever loving, open hearted rocker with a shag like a 70's Rod Stewart, while Barrett's Howard is kind of a neurotic, geeky, jazz loving, paranoid every man. They work at the "Nabootique", a Bizarre/Antique shop owned by Naboo, a certified Shaman, and his gorilla friend Bollo. Barrett and Fielding also portray other creatures and characters, planets and plants, such as "Old Greg" (my personal fave), "The Moon", their celestial friend who waxes lyrical about life, and Tony Harrison, a bladder-like head who "sits on the board of Shamen" - a committee where The Boosh's friends can be found.

To find out more and to find scheduled times, check out Adult Swim's site: http://www.adultswim.com/shows/themightyboosh/#

Or head over to The Boosh's Official site to find out more: http://www.themightyboosh.com/
Posted by TVBlogster at 10:51 AM

Email ThisBlogThis!Share to TwitterShare to FacebookShare to Pinterest
Labels: The Mighty Boosh